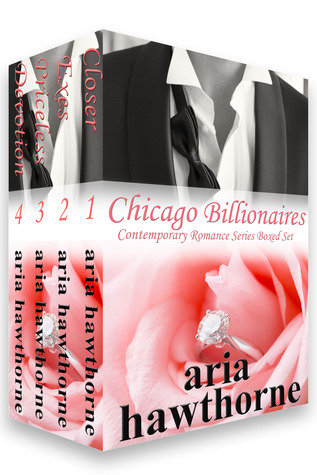 The Chicago Billionaires is a box set worth reading! The stories are loosely tied together by four successful men who are in the business of Chicago building and real estate and who will find their snarky, take no nonsense women who will unequivocally change their lives. Here are my individual reviews of each of the four fantastic and must read stories which are included…

Inez is a single mother to a young child and looking for work at a temp agency. She might also have a little issue with being quiet and doing what she’s told when it doesn’t suit her. She is a strong, educated woman and can not pretend to be any less than that.

Sven has built the largest most ambitious building in Chicago, the Spire. But soon after he has an accident that has caused his entire life and career to start crumbling before him. Sven hires Inez for the job as his companion to get him through the next few days navigating parties in his honor and to hide the fact that his eyesight is failing him. But in the short few days that he and Inez spend together Sven starts to realize that what he thought he wanted out of life may have been very shortsighted.

‘And accept it (an award) without the blindness of ego that fueled my ambition to build the Spire, but rather a humility that now quiets the soul’

This book was a refreshing take on a common story line, but without the common predictable and overused scenarios that tend to be written. Inez was a refreshing, strong woman, and I loved her relationship with her hilarious grandmother. Sven and Inez not only are navigating the world trying to hide his impending blindness, but they are also keeping exes and colleagues from ruining their chance at happiness.

What a fantastic read!

This book starts with Harvey, who has succeeded in his career, is on track to build the biggest towers in the world, but is feeling empty. He has been divorced from the love of his life for a year and is trying to move on. So starts the beginning of a ‘relationship’ with a mystery woman from which he received her phone number from an acquaintance.

Then we are introduced to Alma, who is an antique restorer, loves all things historical and wants to save them all. Alma, is also divorced, and has started doing a little sexting with a mystery man…

Harvey and Alma, turns out are divorced from each other. Harvey is still very hung up on his ex-wife and Alma can’t see the Harvey she fell in love with now that this new Harvey has found his success in tearing down the history in the old buildings they once wanted to restore together.

The characters made this book such a fun read with every humorous thing that was said, I loved Alma’s sister and father and the relationships they still have with Harvey. Add in a little mystery, some history, Chicago architecture and of course some hot encounters between Harvey and Alma! This book was a pleasant surprise, had a nice fast pace, but well developed, likable characters. Truly a must read.

Miles Braxton-Worth has been watching Maribel Martinez from afar… she is a shop girl in a department store in his work building. On Valentines Day Eve he decides to finally approach her.

Maribel knows who Miles Braxton-Worth is… everyone who works in her building does… but the fact that he knows her… by name? That was not something she was expecting.

With their fantastic chemistry and undeniable attraction, they both head for an intense weekend of getting to know each other… but when Valentines Day is over and their real world starts interfering, will what they have found in each other withstand the differences in their lives?

Once again, this was a amazing story. I love that Miles doesn’t care or really even notice the differences in his and Maribel’s means and existences. He is into her and wants to spoil her and all he can hope is that she lets him. Maribel is wary of Miles and if his feelings for are indeed genuine. She doesn’t want him to feel like he needs to buy her and she isn’t dazzled by all of his money, she just likes him for who he is and can’t seem to keep herself from giving into him repeatedly.

Miles and Maribel have some hot and steamy sex, a fast whirlwind romance and after it all, you find they have an even deeper meaning and understanding that they share.

Isabel Alvarez has established herself as an irreplaceable asset to her boss Phillip Spears. She has his respect, the entire office staffs… and also his professional competition. So when mysterious gifts start showing up, with vague cards attached, she decides she needs to tread carefully. Because not only is Phillip her boss and a man she respects, he also gave her the opportunity to establish herself in his company when she was at her most vulnerable. The lifestyle he has afforded her and her young son, and the chance he took on her is something that deserves her utmost loyalty.
But the gifts turn into clandestine meetings in the shadows, and some intimate encounters with a man she hasn’t seen, but has definitely been close to… the only problem is… who is Isabel’s mystery man?

This book was a very enjoyable read. I loved Isabel’s loyalty, but also her spine. She is a smart woman, who has never let her circumstances drag her down in life. While she struggles with taking time for herself, away from work or her son, she realizes how important being treated well, by her mystery man is, and she takes that experiences, just for herself.

While the story did move fairly slowly at times, it was still full of some good guy vs opportunist business competition, a cute little kid, a strong heroine, some hot sex scenes, and the mystery of who is pursing Isabel. I would definitely recommend this solid, sweet, well written read.

I received a complimentary copy of this box set for my honest and unbiased review.