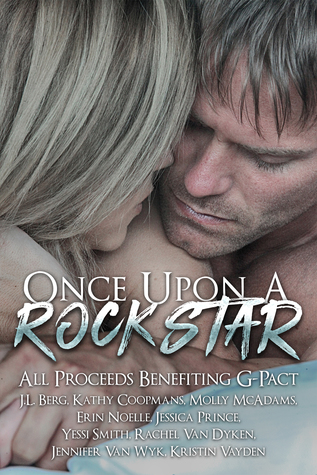 This anthology has so many fantastic stories included! With something for everyone, from scorching hot sex to second chances to musicians with big hearts, you can not go wrong. I enjoyed every one of these novellas, from characters we’ve already met, to the beginning of new stories we will be getting more of later, I can’t wait to see what these authors have in store.

Buy today, all proceeds benefitting G-Pact with a foreword included about gastroparesis awareness and info for those affected by the disease.

The Realtor and the Rock Star by Jennifer Berg

Lead singer for the band Black Tie Affair, Kennedy Kade has finally started to feel like she has made it. Deciding to settle in the LA area, her first order of business is to buy her dream house. When she meets realtor Ryan Rhodes she is immediately rubbed the wrong way… his arrogant player vibe tells her all she needs to know…

The Right Direction by Kathy Coopmans

Roman Nixon’s life changed completely when he was discovered and made the move to LA to further his career. Leaving behind the one person who mattered more than anything to him, Joslyn Reynolds. Now, when his life is in shambles, the only thing he ever wanted returns… and she isn’t getting away so easily this time…

All Maxon James wants is Libby to be his. After leaving her time and again to go on tour with his band, she is always waiting for him when he comes home. Until this time. She’s been avoiding him and he doesn’t know why… but he’s not giving up that easily…

Rocking the Racer by Erin Noelle

Almost a year has passed since Ashlynn had one steamy encounter with Argentinean race car driver Milan Barcelo. Now that her tour has come back to his hometown she is desperate for another…

Play Me by Jessica Prince

Reagan’s sister drags her to a rock concert and demands she lets loose. When she catches the eye of lead singer Maddox Sheppard thats exactly what she does. Being so far out of her comfort zone Reagan is ready to ditch the after party… and then Maddox shows up…

What About Us? by Yessi Smith

When Brandon Wright, rock god with a soft heart, steps in to help a teenage boy in a bad situation, he gets the bonus of meeting Maria. Falling fast for this struggling family, Brandon wants to help them in any way he can… but Maria knows the only person she can rely on is herself… no matter how tempting Brandon’s offer is…

The Song by Rachel Van Dyken

Saylor and Gabe are having a baby… tonight. As old friends gather around, their lives change completely… and the new parents learn to really have it all…

When Brandon spots the mystery girl talking to his sister in the audience at one of his gigs, he immediately feels that he has to meet her. Savannah is just as attracted to Brandon, but he is intent on a relationship… and she is harboring some deep insecurities.  Now, if he can find her again, he will make it his mission to help her see things his way…

When Cardinal Sinclair is tapped to help an old acquaintance with her song, he wants nothing to do with her. Jaya once betrayed him, and if it weren’t for her charitable intentions he wouldn’t even consider it. When the song starts to come together, Cardinal and Jaya learn to communicate how they should have from the start… through their music.