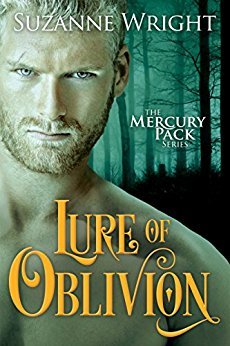 Gwen Miller may have put herself in danger by protecting a shifter who was the target of a vicious attack, but she refuses to change her stance on the situation. Living a quiet and satisfying life with her close knit foster family has taught her to stand up for whats right, and she plans on doing just that… no matter what.

Zander Devlin is an enforcer for the Mercury Pack who happens to be in town for personal business. When he arrives for his stay at the B&B where Gwen lives and works he is immediately drawn to her… whether his wolf agrees or not. Once he learns of the dangerous situation Gwen is facing, his protective instincts kick in… and his new focus involves all things Gwen…

This was a good read. This is book three in the Mercury Pack series, where we get the story of Zander Devlin. Zander is pretty closed off due to his twin brother, who is self centered and focuses on his hate for Zander throughout their life. With an unhappy childhood in a family who dismisses him regularly Zander decided to do his own thing. But, while Zander chose to move away and join the Mercury Pack, his brother has a difficult time leaving well enough alone.

Before being a part of her foster family that she loves so much, Gwen lived her life in some pretty bad conditions. Thankful for the life he has now, she focuses on helping her family in any way she can. She is strong and confident, but can’t really see what someone like Zander would see in her.

I liked Zander and Gwen as a couple. They both have similar guarded attitudes, but easily let each other in. As usual, the sex in this book was shifter hot, and the plot was engaging while showcasing the true selflessness in a character like Gwen.