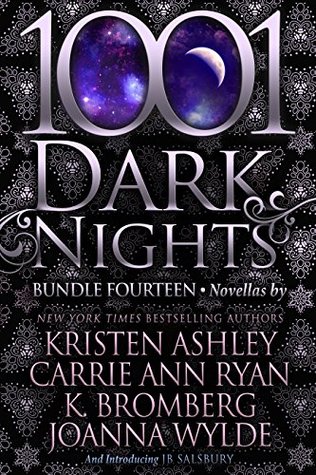 This 1001 Dark Nights bundle fourteen was simply amazing! Featuring four novellas and one full length novel which were written by such amazing authors. Each story was different and fresh and I enjoyed all of them immensely!

Daisy has had a life full of hardship, and then the unthinkable happens. Determined to get past her trauma on her own, just as she always has, she is thrown when one very persistent Marcus Sloan keeps showing up for her.

This novella is tragic and utterly beautiful. Daisy is a super southern, her own style icon and the strongest, yet sweetest woman. Marcus is someone who is feared in the Denver underworld, but to Daisy he is the sweetest, most patient man… and just what she has always needed.

I couldn’t have been any happier with this highly anticipated story. Kristen Ashley not only stayed authentic to the Rock Chick series, but she added such an amazing epilogue that I frankly sobbed my way through reading the entire ending. Simply fantastic.

Holly Rose is ready to break out of her good girl shell and start doing things that are a little more… adventurous. When Brody Deacon offers himself up to help her, she immediately knows she wants that very thing.

This novella didn’t hook me all that much. While I liked Holly and Brody, their relationship felt a little forced and their story wasn’t my favorite.

If you’re a fan of the Montgomery Ink series you will most likely love this novella! Holly and Brody are both great friends with all of those characters!

Harper Denton is back in LA and on a mission to prove herself for the sake of her job. Pitted against a bunch of men to present the lowest bid for a construction project shouldn’t be a problem… until she sees a blast from the past… Ryder Rodgers.

Going head to head with Ryder was always a thrill… and now that he’s older, sexier and tattooed…

This was a sexy ad fun novella! With a sexy and fun rivalry, this story was an entertaining read!

Mandy is done with men. Nothing has gone right in her life when a man is involved. But, when Shade comes into the bar where she works, she might have an issue convincing him that she doesn’t want his attention…

Shade is the President of Reapers MC, he is a man who get what he wants… and he wants Mandy.

This was a fantastic read! I loved Mandy, she was independent, hardworking, and had no problem standing up to Shade. The whole story was incredibly sexy and had me engrossed from the beginning.

Fighting for Flight by JB Salsbury

Despite her unconventional upbringing, Raven Morretti has made a life for herself that she loves. Working as a mechanic and surrounding herself with friends who are better than any of the family she ever had.

Jonah Slade is the best MMA fighter Las Vegas has to offer. Along with his success comes a playboy lifestyle… that changes the second her meets Raven.
Raven and Jonah fall for each other quickly and seamlessly, but when Raven’s past finds her, they will have to fight for more than just their relationship.
This was a fantastic read! This full length novel was sexy, and sweet and I absolutely loved Raven and Jonah. She was an innocent who grew up in the least innocent of circumstances, and he was a fighter who is about to face the biggest fight of his life. Be sure to check out the rest of the Fighting Series as well!

I received a complimentary copy of this book collection for my honest and unbiased review.