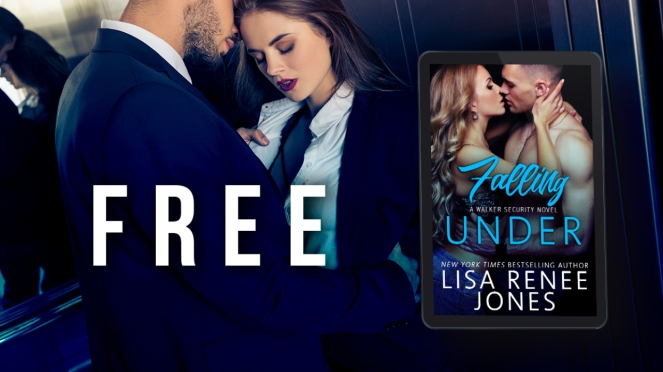 To celebrate the release of Pulled Under and Falling Under on AUDIBLE (plus they’re both FREE if you have the Audible Romance Package) Lisa Renee Jones has made Falling Under (Walker Security #3) FREE for everyone! This is for TODAY ONLY!

Ex-special forces, Jacob King, is a man who keeps to himself, having learned the hard way that letting people close to you, trusting them, might just get you killed. A lesson he learned when members of his Special Ops team turned dirty, while others, men he considered friends, died. He made them pay. He made them hurt. He put them in jail. And so he doesn’t trust anyone anymore. He keeps his women hot and fast, his friends few to none, and his clients through the elite Walker Security at a professional distance, but safe.

It works for him. Until it doesn’t.

His newest job should be simple and cut and dry. Jewel Carpenter, the daughter of the CEO of Carpenter Enterprises, is receiving death threats. He’s to protect her and find out who is issuing the threats.

Until the chemistry between he and Jewel is all about love, hate, and sex. But even as he fights the attraction to Jewel and discovers there is more to her than meets the eye, the real threat comes not from the threats she’s receiving, but the connection she has to him. Because his past has come full circle, and those men he’s made pay for their sins now want him to pay. And what better way than the woman in his bed?