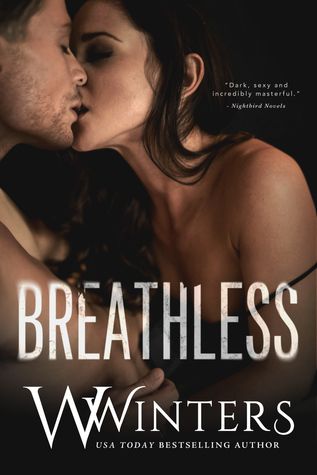 ***This review may contain spoilers if you have yet to read Merciless and Heartless, the first two books in the series***

The day that Aria Talvery has been dreading is finally upon her. Will her love for Carter change her alliance, or will she be forced to hate the man she loves….

Breathless leaves off right where we ended in Heartless, with that torturous cliffhanger. The war has started, and no one is safe. With attacks coming from everywhere, while Carter wants every last one of his enemies dead, his largest fight may be with the woman he loves.

This book has Aria and Carter at a crossroads. With betrayal and death surrounding them, no one knows what will be left when the dust settles and the conflict is over.

Aria seems to be getting stronger with each obstacle thrown her way. Having been an outside observer in the past, she is starting to be a woman that no one should mess with. Rising from the mess that her life has become, she needs to decide where her fight will ultimately take her, and who she will stand beside when the time comes to choose.

Carter needs to focus on winning and with that, losing as few men as possible, but it always comes back to Aria. He loves her, but she is still his enemy, now more than ever…

This book is so freaking good. With the focus on the war at hand and the Cross brothers fighting for whats theirs, no one is safe from the mess this conflict has created. Even at a turning point, the relationship between Aria and Carter is still very much a focus in the story, so we aren’t left bereft from their scorching sex and relationship turmoil.

The Talvery and Cross feud isn’t over, and with one last cliffhanger, I can not wait to see what is in store for Aria and Carter in Endless, the much anticipated conclusion, set to release November 13th.