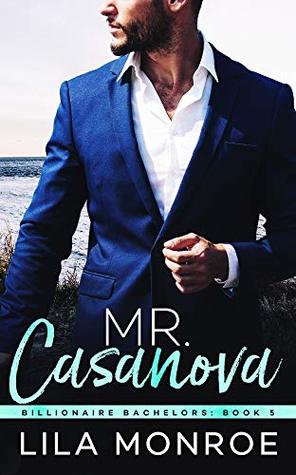 In the midst of his failed marriage and now his reputation being shredded by the press, Luke Rafferty needs to get away from the toxicity of Hollywood. And buying a fixer upper in the Hamptons might be just the change he needs to escape the turmoil of his life in Los Angeles.

Stella Hartwick is a contractor who knows her stuff, but can’t get the jobs to prove it. Overhearing a private conversation in which Luke expresses the need for a fake girlfriend has her thinking… he needs a girlfriend, she needs the renovation job… what could be better than a two for one deal?

From fake dates, to very real kisses, Luke and Stella set out to convince the world they love each other… but need to make sure they don’t fall for each other instead…

This was a fun, light read with an entertaining fake relationship scenario that is the touchstone for the Billionaire Bachelors series. Luke and Stella’s story was a classic movie star meets local girl and the growing pains that come with their vastly different lifestyles…

Stella has been working to build her renovation business back up since the loss of her business partner, and fiancée… due to him being a cheating jerk. Now he is her competition, and he lives for swooping in and taking her potential jobs. So when she bids on Luke’s property, her landing this job is very important to her… and she prepared to be fully dedicated to the project.

Luke’s ex-wife is making his life miserable, and slowly working to decimate his career. Looking for some solitude and a project to focus on, the house in the Hamptons seems like the perfect distraction. And then he meets the answer to his renovation… and reputation prayers.

Stella was a great character, with her love for her career being second only to her devotion to her town, she was a refreshing, no nonsense woman who has a great grasp on what is important in life.

Luke seemed like a typical Hollywood jerk, until Stella saw the man behind the tabloid stories. He was sincere and genuine, and she had to fight incredibly hard to keep herself from falling for him… but did it anyway…

While I really enjoyed this book, I felt like it was missing some much needed character development and a little more depth to Luke and Stella’s relationship. I would have loved just more of EVERYTHING from this story as a whole.