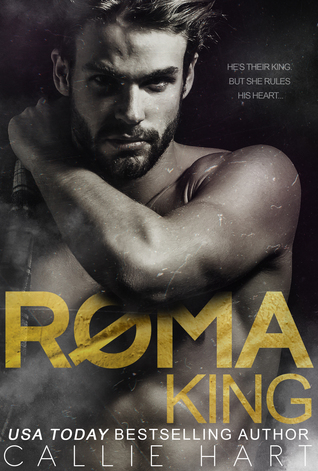 He comes to her in her dreams, a man who is unlike anyone she has ever met, but when she wakes up, the details fade, leaving her with a sense of never being able to grasp the reality of what he truly means to her.

Zara Llewelyn is an emergency dispatcher who loves her job, her little apartment and her neighbors who make up her small group of unlikely friends. When odd things start happening in the wake of a 911 call, she finds herself drawn into a world that she never knew existed…

Pasha Rivin was banished by his Roma family who now wants him to come back and take his place as their leader. Too bad he likes his life without the confines of his past holding him hostage any longer. Zara is a woman he never thought he would meet, and he knows he should keep his distance… for her sake.

Roma King was an intriguing introduction to Zara and Pasha’s predestined love affair. With Callie Hart’s always excellent writing, this book was filled with the promise of incredibly hot sex and a storyline that possesses enough mystery to fuel an engaging narrative. I found it completely impossible to put this book down, and I am desperate for more…

When Zara is pulled into a case of a missing boy, she can’t stop herself from doing everything possible to help find out what happened to him. With a mysterious tip bringing her to the world of the Romas, she meets the arrogant Pasha and his less than welcoming extended family.

Pasha has built a life for himself since his banishment from his family. Owning a business and living in a permanent apartment, he has left his old ways behind, and has no plans to ever going back to them. Finally meeting Zara, his desire to pursue a relationship with her comes with an even sterner warning to stay far, far away from her.

While their connection is forbidden, Zara and Pasha can’t deny the outside force that pulls them to one another. And when the memories of their dreams become a steamy reality, their hesitation becomes less important by the second.

Zara was a character who I immediately loved. While she may seem sweet and unassuming, she has a backbone of steel and takes no BS from anyone, no matter how intimidating they are or out of her element she may be.

Holy moly, I could not get enough of Pasha, he was demanding and unforgettably sexy, and I feel like we have only scratched the surface on what he is capable of… and I can not wait to see more from him!!

This book was a slow burn beginning to what promises to be the incredibly hot and undeniably fascinating story set in the world of modern day Roma politics and deception. I am so invested in Zara and Pasha’s story, and I am very impatiently waiting for what happens next after the jaw dropping cliffhanger.