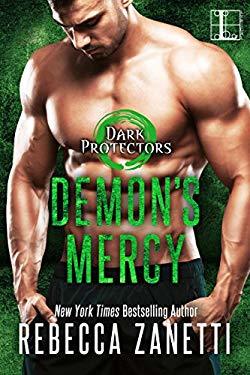 Mercy O’Malley’s people have been absent from their world for quite some time, enough time to acquire an almost myth-like status of their existence. But, with the balance of the world as they know it in jeopardy, they return with a very important mission. To stop the Seven from fully forming.

Logan Kyllwood is ready to fulfill his destiny. But, when a fairy interrupts his life in an attempt to kidnap him, he finds himself in a chase against time to not only get to the bottom of the reason the Fey want him, but to protect the stubborn fairy herself…

Demon’s Mercy was another unforgettable story within the incomparable Dark Protectors series. In a heart pounding race against time and multitudes of unknown enemies, Mercy and Logan find that despite their opposite goals, the connection that binds them is stronger than any duty they are bound to fulfill…

Mercy is a Fae who believes is getting things done, and tends to jump headfirst into whatever mission she believes in. Armed with the plan of kidnapping the fierce Vampire-Demon hybrid before he can become a part of the Seven, she embarks on a solo operation that pits her against the powerful, and dominating Logan, and lands her in a situation of having the tables turned on her.

Logan thinks it’s cute that the little fairy thinks she can best him, until her ability to surprise him with her escape attempts starts to really get on his nerves. He needs answers, and Mercy is going to give them to him, by any means necessary.

I enjoyed this book so much! Mercy was pretty resilient, and hilarious, with her determination to get away from Logan and her never-ending quest to escape from him. resulting in a lot of sexual tension filled chase scenes and the inevitable catching after said chase… insert full body shiver. Logan was definitely my brand of bossy and protective, with his need to keep Mercy close coupling with his growing desire to show her who was boss, their sparring only stops when they run into the multiple forms of danger that barely let up throughout this action-packed book.

With the always ultra-sexy paranormal elements show casing the toughest of men finding their mates, and the women who can take on the dangerous world they exist in, this book did not disappoint as the newest segment in the continuing story of the Dark Protectors saga.