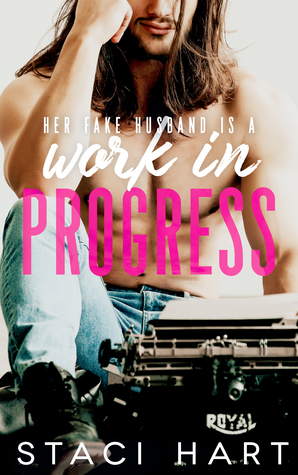 Amelia Hall is a painfully shy book blogger who lives life sticking with the things that make her feel safe. Determined to work on her inability to converse with strangers or spend too long in crowds, her first assignment is to meet the infamous author, Thomas Bane. The very same author that she has written some no-so-stellar reviews of his work…

Bad boy author Thomas Bane lives his life in the spotlight. From his league of adoring fans to his plethora of gorgeous ex-girlfriends, his life is charmed beyond belief. Except his career is struggling, and his latest deadline is quickly approaching… with no new work to show for it. And then he meets Amelia, with her passion for his work and all the reasons why it could be better… and he comes up with the most brilliant idea…

Work In Progress was an incredibly sweet story, it was sexy, funny and had just enough drama to keep the storyline always flowing and engaging. From their fake marriage to the slow burn progression to being each others everything, Amelia and Thomas find the perfect working relationship… and the kind of love that they have only ever dreamed of..

Amelia has spent most of her life being a shadow of the woman she is on the inside. With her issues with making conversation or her incredible lack of confidence, she needs to work on doing the things that frighten her. And then she meets Tommy, who needs her help, and Amelia dives head first into the greatest challenge of her life.

Tommy is usually an expert at controlling the narrative of his life, from his dating escapades to his unfortunate tendency to get into fights that have nothing to do with him,  lately his image has been suffering quite the blow. Asking Amelia to help him with his next book jump starts his recently dormant creativity, but when he asks her to marry him, they embark on something uncharted, that has a whole new set of rules.

Amelia starts off as a shy virgin, who has never been kissed, and under Tommy’s tutelage, she finds the comfort to try things she was once too nervous to even contemplate trying. Although she was inexperienced and fairly naive, she was such a genuine woman who knew herself and had such an amazing inner strength that eventually shines out of her.

Tommy was such a surprisingly different man than his public persona has made him out to be. With the love he shows for his family and the gentle and patient way he treats Amelia, he was a completely swoon-worthy hero.

I loved everything about this book and the adorable relationship between Amelia and Tommy! With all of their sexy encounters, and their deep and unfailing connection, this book was such a refreshing and heartfelt read, and another great addition to the stories of the uniquely strong women of the RLC.