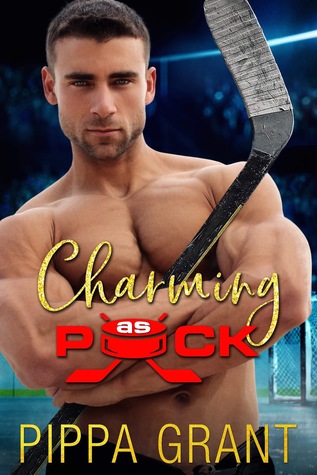 Kami Oakley wants to be Nick Murphy’s everything… but after their ongoing friends with benefits arrangement fails to lead to anything more permanent, she decides to cut her losses and call it quits. Nick is a great guy, but he is never going to want the same things that she has always dreamed of for her future.

Nick Murphy is a professional hockey player who never takes anything too seriously… except maybe prank wars and protecting his sister. Kami is one of the closest friends he has ever had, and when he finds out he has done something to ruin their friendship, he is at a loss as of how to fix things. Nick has always been all about focusing on the things that he wants, but if what he wants is a real chance with Kami, he is going to have to do something completely out of his character.

Charming as Puck was an irresistible and hilarious story of a boy, his pet cow and the girl who got away. Nick and Kami’s sex without commitment relationship was uncomplicated and a whole lot of fun, until Kami realizes that Nick will never feel the same way for her that she does for him. She is ready to move on… and Nick suddenly realizes just what he may be losing…

Kami is a veterinarian who wants the most simple things in life. Love, commitment, kids and a few pets along the way. After her ongoing infatuation with Nick leads to them getting closer, Kami thinks that he is finally going to see how great they are together, but all she gets is some epic, no feelings included, sex.

Nick loves to have a good time. From his pranks, to playing hockey and his more and more frequent time spent with Kami, he feels like he has it all. Until Kami ditches him, he finds a cow in his apartment… and then gets evicted. He not only needs a new place to live, but all of a sudden his game starts to suffer. But, worse than all of that is how much he misses Kami. He may not deserve her, but he will find a way to prove that he can be everything she needs…

I loved Kami and Nick so much, they were such a perfect couple and Kami deserved every bit of attention Nick (eventually) showers on her. Kami comes off as a sweet, people pleaser, but she definitely has a spicy side hidden behind her nice girl exterior. Nick seems like a completely clueless specimen, that is, until he finds that he has to step it up if he wants Kami to ever speak to him again.

This book was an ultra sexy, second chance romance and a complete comedy of errors. With the hilarious pranks and cameo appearances from out past hockey playing favorites, some new interesting characters, babies, babies, babies and, of course… the animals!!