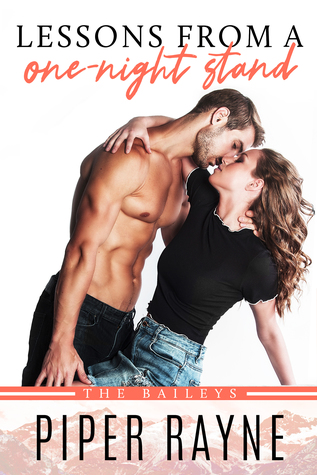 Austin Bailey is Lake Starlight, Alaska’s beloved baseball coach and high school teacher, who very rarely finds time for a hook-up. And as luck would have it, after the hottest one-night stand in history, he finds his mystery woman a lot closer than he is… comfortable with.

Holly Radcliffe came to Alaska to fill in as temporary principal at the local high school. Running into her one-night stand is definitely… inconvenient… but being featured in the local gossip website is by far, decidedly worse.

Lessons from a One-Night Stand was an adorable and enchanting read that is set in the remarkable town of Lake Starlight, Alaska, where the residents are loyal, welcoming, and always up in your business. Austin and Holly’s relationship has a predetermined expiration date before it even gets started, but why throw away a few months of getting to know each other if they already can’t seem to keep their hands to themselves?

When Austin lost his parents in an accident, he made the ultimate sacrifice for his future and moved home to Alaska to help raise his younger siblings. Now, years later and approaching the end of his parental duties, Austin is pursuing a career far away from his Alaska roots. Meeting Holly couldn’t have come at a worse time, but now that his future is finally in sight, Austin isn’t going to be derailed again so easily…

Holly is in Alaska for a dilemma of her own. With only a temporary job and her life waiting for her back in Florida, she knows that her time in Alaska is going to end soon, and she would prefer to go home without a broken heart. Austin is a man she knows is a game changer, but a real relationship between them is just not something that is in their future.

Austin was such an atypical male lead. With his devotion to his family and his commitment to help them all when they needed him the most, he was never bitter about the sacrifices he once made. He was of course, sexy AF and possessed such a charming personality… perfect for talking Holly into giving him a chance they both know could end badly.

Holly is facing something very personal in Alaska, and in the process hiding her move from her mother. Scared of what she will find and never having felt more alone, Austin is quite a welcome distraction. I loved her for being a strong and independent woman, who didn’t give in easily or scare when life got complicated. I thought she was the perfect match to someone as loyal and straightforward as Austin.

I couldn’t get enough of this book, and I absolutely adored the town of Lake Starlight!! With the quirky residents and the thirst for gossip, I am so freaking excited at the large amounts of stories that seemed to be planned for this series! The Bailey family is filled with one fascinating character after another, and I am pretty much sitting here salivating for each and every one of their HEA’s!! Delightfully funny and entertaining as heck, don’t miss the first book in fantastic new series all about The Bailey’s!!