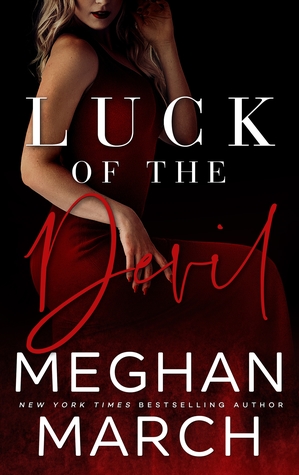 *** Luck of the Devil is book two in the The Forge Trilogy and must be read after Deal with the Devil. This review may contain spoilers if you have not yet read book one. ***

When Jericho Forge married India Baptiste, he made it very clear that he had an ulterior motive for wanting to marry her. And just as they have started to settle into married life, the truth of their marriage starts to slowly reveal itself.

Jericho is a man more likely to provide more secrets than answers, but Indy isn’t the kind of woman who will sit around and wait for the truth to come out…

Luck of the Devil achieved a completely new level in the hot AF relationship between Jericho and India Forge. Things in the Forge marriage have done anything but settled down, and the only thing that the new couple can count on is their insatiable need to get as dirty as possible with each other.

India has reached the point where she is questioning everything. As an incredibly savvy and world hardened woman, taking things at face value is not something she is prepared to do. She doesn’t know who she can trust, but she vows to continue to live her life how she wants to live it. High stake poker games are in her blood, and being married to Jericho is not going to cramp her style…

Jericho had his reasons for marrying India, and they still are as important as he first believed them to be. But, after his time getting to know his wife, in and out of bed, Jericho starts to realize that his initial reasons for their marriage fall far behind the need he has found to have his wife by his side.

This book was another wild ride in the The Forge Trilogy. With sex that keeps getting hotter and hotter, business deals that mean more than just business, and the building… or breaking down of trust and honesty, Jericho and India’s relationship is nowhere close to being settled…

Holy freaking cliffy!! I have no idea how Meghan March can give us cliffhanger after cliffhanger that keeps getting so much more intense, and ends up being even better than the last! I absolutely can. not. wait. to read the conclusion of this trilogy, Heart of the Devil. If this book was any indication, it is going to be freaking explosive.