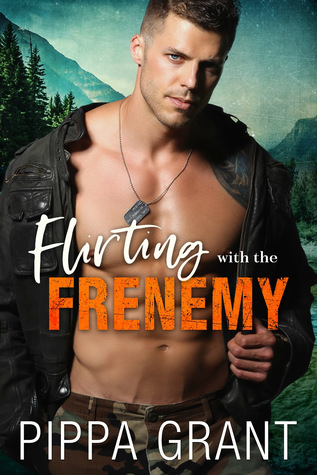 Ellie Ryder has had a rough six months, after her boyfriend unceremoniously dumps her, life as she knows it starts to slowly fall apart. Now, with the upcoming wedding of her BFF, Ellie has to prepare herself to come face to face with her ex again… and his new girlfriend. Luckily for her she has the perfect wedding date ready and waiting…

Wyatt Morgan can’t wait to spend some much needed time with his son. After being denied a relocation with the Air Force and then losing his custody battle with his ex, it’s been a long time since he was able to have some uninterrupted father/son time. But, the house they’re staying at already has a guest… and she wants nothing to do with him… for now.

With their antagonistic relationship that they have had since they were kids, nothing good could come from Ellie and Wyatt embarking on a relationship… or so the universe is telling them…

Flirting with the Frenemy was an absolutely hilarious and all-around delightful read!! Ellie and Wyatt’s adorable rivalry is filled with fantastic banter, constant one-upmanship, and a plethora of sexual tension…

Ellie has never been one to back down from a challenge, but after a recent rough patch, she hasn’t been acting as her normal self. Recovering from an injury, and some residual heartbreak, she isn’t looking forward to seeing her ex… at all. And then Wyatt shows up unannounced and as cocky as ever. First, her ruins her fake date she has set up for the wedding, then he does everything he can to push all of her buttons… especially the ones that get her all hot and bothered.

Wyatt is an arrogant know it all, and Ellie’s brothers BFF. Seeing his former adversary at her lowest point is completely unfathomable to him, so he makes it his mission to get the old Ellie back… one challenge at a time. But the Ellie that he has always known, who refuses to lose at anything, is starting to get under his skin, and he isn’t sure he wants her to ever leave.

OMG!! I had so much fun reading this book!! First of all, the story is set at a pirate festival, I mean seriously, that aspect alone provided so many hilarious and entertaining scenes!! Then there is the unique and unforgettable relationship between Ellie and Wyatt, these two nuanced and ultra lovable characters that deserve to find the kind of happiness that they can only really achieve with each other.

I seriously adore Pippa Grant!! With her ability to create such amazing interconnected characters, every story leads into your next must read standalone. And this book absolutely provided a whole new crop of amazing characters to salivate over in the rest of the upcoming Bro Code series… and I can’t wait!!!