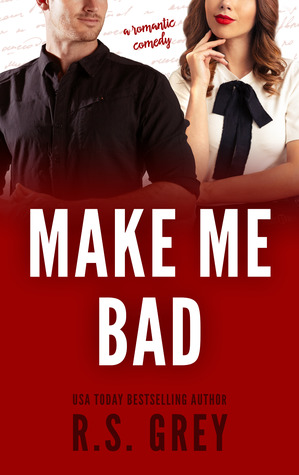 In the aftermath of a truly pathetic 25th birthday, Madison Hart decides if she wants to find whatever it is that her life seems to be missing, then she needs to take some chances and live a little. And with her overly protective father and brother always standing by… she needs someone who knows a thing or two about being… bad.

Ben Rosenberg isn’t the same young punk who used to got away with everything in high school. Although his family has been placed on an impossible pedestal in his hometown of Clifton Cove, he has worked hard to earn his place in life since his misspent youth. Still, despite all of his growth, someone like Madison is still way too good for a man like him. That is, until she point blank asks him for his help with a little bit of ruin…

Make Me Bad is another hilarious and unforgettable story from the one and only R.S. Grey!! Madison and Ben may be polar opposites, and while their attraction doesn’t make sense on paper, it certainly burns up page after page in this adorable book!

Madison has spent her entire life being sheltered by her father and older brother. Although she is understanding of their need to keep her safe, their attention has slowly  turned her life into one stifled day after another. And when she garners the attention of the one and only Ben Rosenberg, they issue one very stern warning… stay far away from someone like him.

Ben is a nice guy with a last name that seems to rub people the wrong way. Although he tends to be unconcerned with what people think of him, there is something about Madison that has him caring very much how she sees him. While he is more than happy to help her with her desire to break a few rules, he also realizes that he needs to keep as much distance as humanely possible to avoid falling for someone as flawless as Madison.

This was seriously such a fun read! First of all, Madison was completely adorable. Her unfiltered views had me continuously laughing out loud, and she had the most unabashedly genuine personality, and she was completely comfortable with herself. The antics she invented for Ben to participate in during story time at her library are just about as innocently sexy as possible… and book boyfriend perfection for any romantic comedy lover.

Ben was pretty much as irresistible as they come. He seemed like a genuine good sport with his agreement to help Madison, but with maybe the smallest of ulterior motives in mind. He was always up for some fun, but also didn’t mess around when it came to Madison’s safety… and her heart.

This book was hilarious and sexy, and had only one small imperfection in it’s plot. I think the little bit of added drama ended with an unsatisfactory conflict resolution that I would have loved to play out differently. But, seriously… 4.5 Stars to Make Me Bad, because everything thing else in this book makes it an absolute must read.