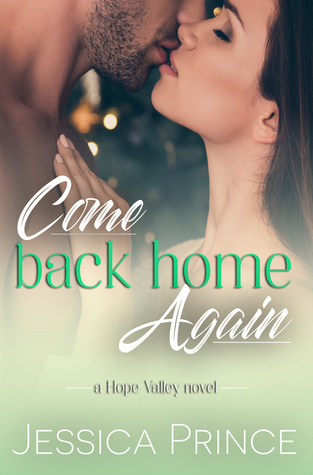 Hope Valley hasn’t been home to Temperance Levine since the unimaginable happened, over 20 years ago. Leaving behind her friends and the once love of her life, she never wanted to return to where her heart was shattered beyond belief… that is, until her beloved aunt needed her.

Hayes Walker has been living with only half of his heart since Tempie left Hope Valley. And now she’s back, but with her plans to only stay in town temporarily, Hayes isn’t willing to risk the heartbreak of watching her walk away from him… again.

Come Back Home Again is a story of everlasting love and it’s struggle in the face of heartbreaking circumstances. The relationship between Tempie and Hayes is the entire town of Hope Valley’s most hoped for reconciliation, but with so many years spent apart, the young love that once burned so brightly may never return to what it once was…

Tempie is only back in Hope Valley for a short while, and she is counting the days until she can return to her career and life that she has made for herself in back in Chicago. While she lost touch with everyone in her hometown a long time ago, it doesn’t take much for her to fit right back in with the friends and memories that she left behind. And while seeing Hayes again still gives her a dull ache in her heart, it is definitely for the best if they keep their distance while she is waiting to leave again.

Hayes has a career he loves, and a pretty stagnant personal life. With Tempie back in town he tries his hardest to keep his distance, but in a place like Hope Valley, distance isn’t something easily achieved. With an opportunity to finally move on from their past heartache, the second chance that they deserve is theirs for the taking… as long as life will stop getting in their way…

While Hope Valley may have been an idyllic place to grow up, there’s a recent unsolved murder hanging over it’s residents and Tempie alike, and just when everything is finally going her way… tragedy is not far behind…

Come Back Home Again was another fantastic book in the Hope Valley series! Tempie and Hayes’ story was a mixture of a sexy and heartfelt second chance romance, with a suspenseful plot threatening to tear them apart.

I really liked that Tempie was such a strong woman, and that she had to deal with her personal tragedies in her own way. She was spectacularly selfless and seemed like someone that you couldn’t help but instantly like. Hayes was a quiet alpha personality, who still harbors a soft spot for the Tempie from his memories. And after such a long time apart, once these two made-for-each-other characters realize just how impossible it is to live without one another, they demonstrate just how prepared they are to fight for their second chance at true love.