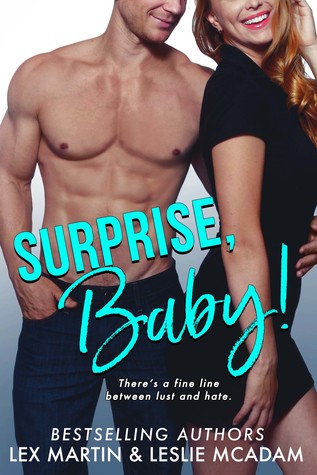 Kendall Greer can’t stand Portland’s resident party boy, Drew Merritt. But, when seeing their mutual friends means spending time with each other, she is prepared to take one for the team in order to have an enjoyable weekend together.

Until their circumstances change and Kendall starts seeing Drew in a whole new, entirely irresistible light.

And then, the surprise neither one of them saw coming is about to completely change the rest of their lives…

Surprise, Baby! was an entertaining and oh-so-incredibly sexy read that is just what the OBGYN ordered! Kendall and Drew might rub each other the wrong way… but when a fateful weekend getaway changes their perceptions, and both of their futures in one big swoop, will the news of their baby-on-board devastate their newfound truce or will the former adversaries find a love worth changing for…

Kendall has poured everything she has into her new PR business. While she is painfully aware of how men like Drew operate, she has no desire to get to know him beneath his playboy exterior. But, in their short, but intense time together, she begins to see the man behind the partying, and he quickly goes from untouchable to irresistible.

Drew has had a recent transformation in not only his body, but also with taking care of his health and leaving behind his party boy ways. Being able to show Kendall how much of a changed man he is ends up just being a bonus to a fabulous weekend. Until per usual, he does something to mess everything up and his connection with Kendall goes from sizzling to avoidance at it’s finest. Desperate to see her again… the last thing he is expecting is the news she has to share with him…

This was such a fun read! Kendall was a successful and hard working woman who was strong in the face of how her life choices are about to change the future she has envisioned for herself. Drew was such an unexpectedly sweet and conscientious man, who may not have always made the correct choices in his past, but is now making up for them tenfold.

The plot was incredibly engaging and well done, and the characters were likable and realistic. But my favorite parts were the beginning animosity between Kendall and Drew, and of course the down and dirty sex that kept their simmering attraction heating up the pages… and their relationship.