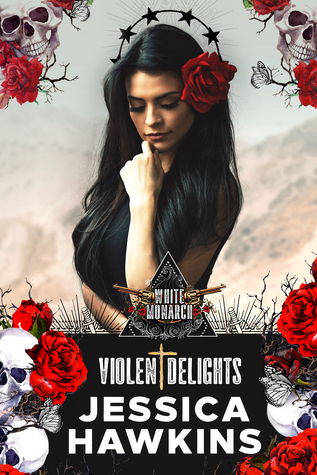 As the daughter of one of Mexico’s most notorious cartel bosses, Natalia Cruz is no stranger to the dangers of life in her father’s home. Attending school in the US, there are very few things that she misses from her old life… and her best friend, Diego de la Rosa is one of them.

With the love that Natalia and Diego share being one of the purest and most true things in her world, when an old ghost shows up to threaten them, the future they have envisioned for themselves will be put to the ultimate test.

Violent Delights is the heart stuttering introduction to the completely unforgettable White Monarch trilogy. Dark, sexy and filled with twists and turns, I was floored with this remarkable and unexpected read showcasing the multi-faceted talent of author Jessica Hawkins.

In the beginning of the tragic saga of the Cruz and de la Rosa families, the tangled love between Natalia and Diego that has been simmering since childhood is finally getting closer to the happily ever after that they have always dreamed of. Marriage, children, and safety… all far away from the dangerous world of the Mexican cartel.

Natalia is blinded by her love for Diego. A strong woman who was raised within the confines of the cartel, she has never wished to return to the world that has already taken so much from her. But, her love for her father and her desire to marry Diego continue to keep her tied to the dangerous life she no longer belongs to.

Diego’s character feels like he is someone who is on the precipice of doing terrible things. Professing his love for Natalia with flowery words and utter dedication, he fully supports her wish to relocate to California and build a life together. But, the sweet side he shows to Natalia may not be the real Diego…

Cristiano de la Rosa is unapologetically dark and depraved. Accused of the ultimate betrayal, he disappeared from the Cruz estate to never be seen again… at least as much as Natalia can hope that he is really gone forever…

Natalia’s story is just getting started, and if the rest of the trilogy is anything like what we have seen already, we are in for one dangerously sexy and utterly twisted ride. With a cliffhanger that leaves your palms sweating, I am utterly desperate for the next installment… that doesn’t release until June!!! I seriously don’t know how I am going to wait on this one…

Book number two, Violent Ends is set to release 6/18/2019 and the conclusion, Violent Triumphs release date is 11/12/2019. Prepare to wait on pins and needles with me… because I think this trilogy is going to be SO WORTH IT.