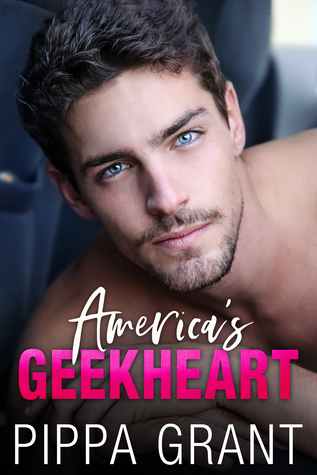 After Beck tweets the wrong person with a terrible joke in what was supposed to be a private message to his sister, he is in need of a serious image overhaul… but more importantly, he wants to apologize to the woman who was pulled into his mess in the first place…

Sarah Dempsey is literally the girl next door… the Beckett Ryder’s sister. Beck wants to apologize to her, for the whole world to see. But Sarah has a very big secret that she works very hard to keep… and being seen with Beck is the last thing she should do…

America’s Geekheart was an incredibly funny and overwhelmingly delightful read about a woman who wants to be left alone to quietly change the world, one giraffe and honey bee at a time… and the man who spends his life in the limelight, but can’t get enough of the girl next door…

Beck made a huge mistake in his poorly executed tweet, but with a whole lot riding on his image than just his underwear line, he needs to smooth things over… quickly. After their first “electric” encounter where Beck tries his hardest to apologize, he finds himself completely enamored with all things Sarah Dempsey… and every single moment that he gets to spend with her ends up being better than the last.

Sarah has had some issues with the cutthroat media in the past, and she plans to avoid being pulled in front of the camera at any cost. But when Beck proposes something that will help him… and the entire species of endangered giraffes in one swoop… how can she say no?

This was such a fun read! Beck was completely adorable… and only slightly clueless at times. With his caring heart and utter devotion to his family and friends, he is impossible not to fall in love with. I loved how he treated Sarah and that he never once tried to make her into someone that she wasn’t.

Sarah was a woman who starts out hiding her past and who she is. But in the inevitable fallout from her public encounters with Beck, she shows such amazing growth and acceptance of the woman she is beneath the years of hiding. With her passion for science and endangered animals, she was also refreshingly intelligent and proud of it.

This slow burn romance was sweet, super sexy, and featured so many fantastic characters that perpetuated one laugh out loud and heartwarming moment after another.