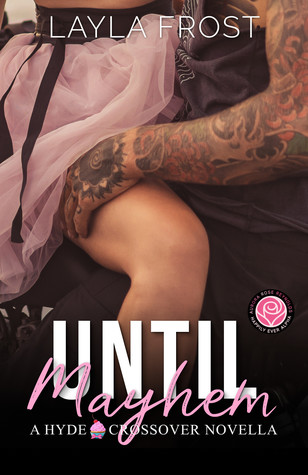 Ophelia Kline sure does appreciate seeing a good looking biker on her way into the grocery store… until the crazy jerk kidnaps her!! Being at the mercy of a psycho shouldn’t be getting her so excited, but there is something about the bossy, tattooed hunk that she just can’t get enough of…

Judge Hawkins notices the suspicious hottie tailing him and he isn’t taking any chances, so he confronts her and immediately knows that there’s no way he’s letting her go anywhere without a fight….

Until Mayhem was an alpha story done right! Ophelia and Judge have enough chemistry and friction to fuel this entertaining and sexy AF story long after it’s final page…

Ophelia is an innocent woman living her everyday life when she takes a little too much interest in the wrong kind of guy. Sure, when someone kidnaps you, it’s probably a good idea to fear them a little, but Ophelia isn’t someone who is accustomed to taking orders.

Judge is the President of Mayhem MC, and is involved in some not quite legal activities. Perhaps Ophelia is someone who is working for a sketchy business rival, or maybe she is just who she says she is, but he isn’t letting her out of his sight until he figures out exactly what is going on… all while getting her in his bed would definitely be a bonus…

I couldn’t get enough of Ophelia and Judge, and I was super bummed when this quick story ended way too soon! Ophelia was hilarious. She doesn’t give Judge an inch and she is a spunky, tough woman who takes to MC life with zero qualms. Judge was deliciously alpha, and was impossibly sexy and bossy (even though Ophelia never let him win a battle between them!) I would absolutely love to see some more from these two in the future!!

This book was part of the fabulous Aurora Rose Reynolds crossover collection combined with Layla Frost’s Hyde series, and seeing so many past characters from both authors in this book was an absolute delight!!