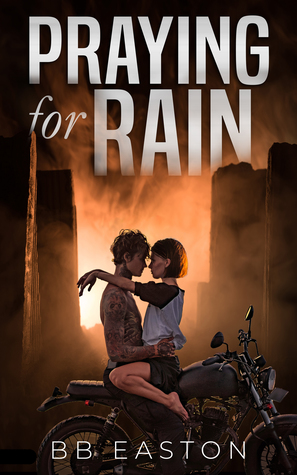 Within the days before the impending apocalypse, Rainbow Williams has come to care about very little. Along with the few people who are left in their destroyed town that is falling apart around her, her goal is to continue numbing herself and simply making it through her last days on earth. Until she meets Wes.

Wesson Parker has always been alone, and he plans to die that way as well… but not on April 23rd with the rest of the world. He has a plan, which doesn’t include the unforgettable girl with the haunted eyes who seems hell bent on making his mission even more impossible than it already is…

Praying For Rain was a dark and utterly chilling story of the world in the days before a full blown apocalypse. With the entire world having the same frightening dreams of the terrible things that will happen on April 23rd, it’s only a matter of time before the chaos is set to consume everyone. Rain and Wes may have found each other at the worst possible time, but getting through everything together all of a sudden makes the end of the world just little more tolerable…

Rain is a survivor, she just doesn’t know it yet. She has become resigned to her fate, with the dreams that have been haunting her for the past year coming closer to reality, the life that she once had is already over.

Wes has had to fight for everything in his life, and he isn’t going to let the apocalypse be the thing that finally beats him. As a self described people user, he does what he needs in order to get by, and he has no issue doing so. But when he meets Rain, using her is about to turn his entire existence upside down…

Let me just start by saying that I have never had any interest in reading any sort of apocalyptic based novels… but when BB Easton writes a book I am there for it… and this one has left me once again in complete awe of her talent and of all things BB.

Rain is so freaking strong, as a 19 year old who has seen some increasingly terrible things, she is patiently waiting for the death that is coming for her in just a few days.   And when Wes shows up as the ultimate distraction, she throws herself wholeheartedly into helping him, because with her running mantra… “None of this matters, and we’re all going to die,” the things that once meant so much to her now mean absolutely nothing.

Wes is a man who cares about no one but himself, but then he keeps rescuing Rain with every bad situation she finds herself in (or that he leads her into). She’s young and acts like she doesn’t want to fight for her life when it comes down to it… but Wes recognizes a fellow survivor when he sees one, and there is something about Rain that he isn’t prepared to let go of.

This book was so brilliantly written, and it left me utterly amazed at the imagination and the story weaving ability of BB Easton. Dark, sexy and so freaking twisted, I am desperate for the next book in this fascinating trilogy.