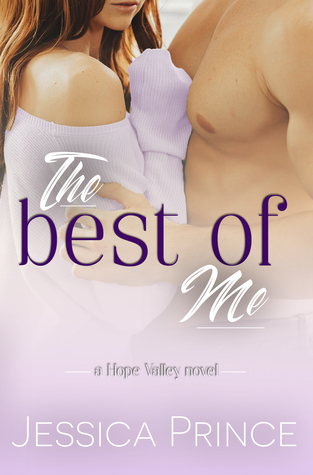 Wynona “Nona” Fanning has a big crush on Trick, who happens to not only be her good friend but also the best man she knows. And although her feelings for him run deep, she would never make a move on a man so recently divorced who hasn’t yet moved on. But, her plans to stay away become impossible the second she finds herself in his strong and determined arms…

Patrick “Trick” Wanderly made the worst decision ever when it comes to Nona. A beautiful and genuine woman like her didn’t deserve the way that she was treated, and now that he realizes just what kind of damage he did to their friendship, Trick is desperate to repair it… along with trying to date the woman he didn’t know he needed so much…

The Best of Me was another beautifully emotional and heartwarming read from the fabulous Hope Valley series. Nona and Trick have been burned by relationships before, but when these two single parents decide to take a second chance at love, they may find that their greatest chapters in life are yet to come…

Nona was such a strong and capable woman who has a refreshingly big heart that always shined through with the love for her kids and everyone that she cares for. She is also a dedicated and successful business owner and the rock that holds her family together. When she finds herself hurt in the wake of her mishap with Trick, Nona resorts to baking her stress away and avoided the man in question at all costs.

Trick feels terrible about his role in hurting Nona. As a natural protector and an inherently good man, he vows to repair the friendship that he unwittingly damaged by his bad decision to finally act on his desire for a woman who already means so much to him. But, when he realizes that Nona will never again be just another friend, Trick will have his work cut out for him trying to convince her to give him a chance at a real relationship.

I loved Nona and Trick so much, and in an already amazing series, The Best of Me was definitely my favorite book yet! This story had such a well done mixed family dynamic, with both Nona and Trick representing themselves as amazing parents and all around incredible people. With the entire town of Hope Valley cheering them on, this story provided many happy and sweet moments with just enough suspense thrown in to keep you turning the pages as quickly as possible.