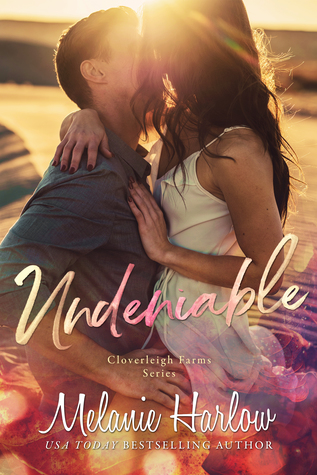 Chloe Sawyer and her childhood nemesis have a… complicated relationship. After having been thrown together constantly since birth, they have a friendship that is unmeasurable, and more often than not, more trouble than it’s worth.

Oliver Ford Pemberton is the man who has always made Chloe’s life equal parts hell, while at the same time being the very best parts of it. While he has always aimed to push her into misbehaving, she also has never once backed down from one of his challenges. And now that they’re both older and wiser… Oliver is counting on Chloe to jump into an adventure with him just like she always has…

Undeniable was a fabulously entertaining read that was absolutely unputdownable! From Chloe and Oliver’s tangled and complex history, to their always strong feelings for each other, the only thing that gets in the way of them finding a love unlike any other is… themselves.

Chloe was a refreshingly smart and driven woman who has been burned by Oliver too many times for her to keep ignoring. But, with her dream of starting a distillery coming with an unwanted stipulation that she has to work with the man she loves to hate, Chloe decides that giving Oliver one more chance might finally yield something that works in her favor…

Oliver is a reformed party boy and renowned troublemaker. And while he has had his disagreements with Chloe in the past, he can always count on her to be the person who covers for him and has his back. With a more recently convoluted past, he will have to work his hardest to get Chloe back as his most trusted friend…

Oliver loves to push Chloe’s buttons, and Chloe can give it right back, and while she loathes him at times, Oliver has a way of always getting what he wants…. but is this the time that Oliver goes too far…

Fantastic read alert! With a love/hate storyline that has a side of true friendship thrown in, this book was fresh, fun and utterly engaging. I adored Oliver and Chloe’s entertaining and unique relationship, filled with banter, hot sex and all of the history that only these two could share. You must read Undeniable ASAP!!