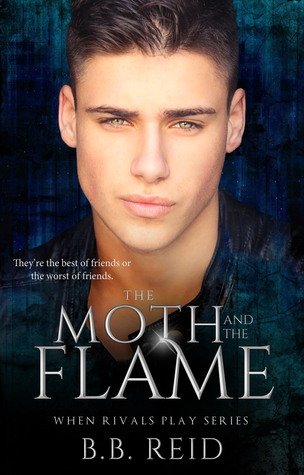 With the loss of her parents, Louchana Valentine finds herself without the ability to trust anyone and their perceived good intentions toward her. She figures being homeless and alone is better than having your heart broken, any day. But when she finds herself in the wrong place at the wrong time, she garners the attention of someone who is more dangerous to her heart than anyone who ever came before him…

Wren Harlan is a trusted member of the notorious Exiled gang, and he definitely doesn’t have the time to befriend a hapless runaway. But, Louchana isn’t someone you can so easily walk away from. She is bright and shining, and a mortal man like him is helpless to stay away from her for too long…

The Moth and the Flame was a story of best friends with a torturous dynamic. Lou and Wren both want something more from each other, but they can’t bring themselves to sully their future and their complicated friendship for the sake of some very hot sex. With gang ties and their uncertain paths, nothing is easy for the pair of friends who mean everything to each other.

I really liked Louchana’s character. She was tough and world hardened, and she makes it very clear that she never wants to be stuck relying on someone, when she knows the only person she can count on is herself. But, she would do anything for Wren and the sake of their friendship. With a non traditional relationship simmering between them, she tends to resort to acting out to bring him back to her after long absences.

Wren is a senior member of a dangerous gang and a man who can be utterly ruthless. He cares for very little in the world, but his friendship with Lou inspires him to always act out of the ordinary with his need to care for her. She means everything to him, and it’s one of the many reasons that he can never, ever touch her, no matter how much he desires her.

This was a good book that included many explosive elements… they just seemed to take an extremely long time to be worked into the storyline. I loved Lou and Wren’s unapologetic BFF status, and the devotion they shared for each other. There was also a few sparse scenes with some very hot sex, but to me, it definitely didn’t feel like there was quite enough included for the sexual tension saturated pages leading up to it.

I would strongly suggest a read of The Peer and the Puppet for a clearer understanding of the events in this book. The plot was very interesting and I enjoyed some former characters that were worked in, but I also felt a little lost at times within the large scale storyline that this story ends up amassing. With some loose details left in the end and some more characters in need of an HEA, the When Rivals Play series feels far from over.

Read the First Book in the Series!!