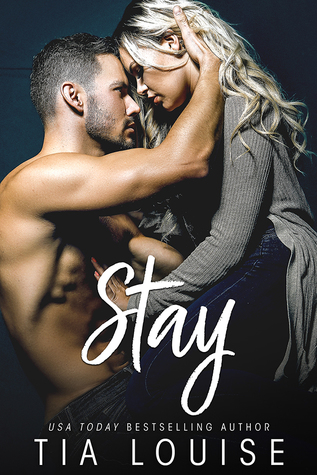 Emmy Barton had the biggest crush on Stephen Hastings when she was growing up. Until the night he shattered her young heart along with any hope she ever had of finding another man who would compare. And now, ten years later, Stephen is back… and sexier than ever… but Emmy knows better than to fall for the illusion that is Stephen Hastings, ever again.

Stephen Hastings is a man who wants to fix any problem that crosses his path. And when he finds the unforgettable Emmy Barton working at a low end job and living in a dangerous area, she suddenly becomes his next project, whether she wants to be or not.

She claims she hates him, but every time he touches her, Emmy can’t deny how much she wants anything and everything Stephen Hastings has to offer…

Stay is a sweet and sexy, marriage of convenience story full of heart and second chances. From the painful heartache from her past, when Emmy is faced with the man who once broke her young heart, she is left to decide if she will put aside her pride for the help she so desperately needs. And when a fake relationship with Stephen crosses the line to something more, will she be able to walk away unscathed when the time comes for them to go their separate ways…

Emmy is a single mother who works tirelessly to provide the best for her son. With a health condition that gives him seizures, she has devoted everything to taking care of him, but when her everything just isn’t enough anymore, a blast from her past swoops in and makes her an offer she would be a fool to refuse.

Stephen is the sexy and arrogant man who gets what he wants. And when he runs into Emmy after 10 years, he knows what he wants is her in his life… along with her amazing son. Devising a plan for them to marry is an easy one, but keeping the marriage temporary and without feelings may not be so easy…

I loved Emmy, she was a strong, independent woman who went above and beyond when it came to her son. With her terrible ability to tamp down her desire for Stephen, she is fighting a losing battle to keep herself from falling in love with him. I loved her sass when it came to Stephen’s utter bossiness, and his tendency to bulldoze his way to getting what he wants.

Stephen was such a kindhearted, yet domineering man. Along with his plan to help Emmy and her son, he foolishly assumes a marriage of convenience between them will be easy… but once he has them both in his life, letting go may not be as simple as he previously thought.

This was such a great read! Emmy and Stephen have a scorching hot attraction that provides frequent, sexy encounters that takes their marriage of convenience to the next level. I also loved the plot for this book and the illness of Emmy’s son being the focus was incredibly well done and definitely pulled at the old heartstrings.