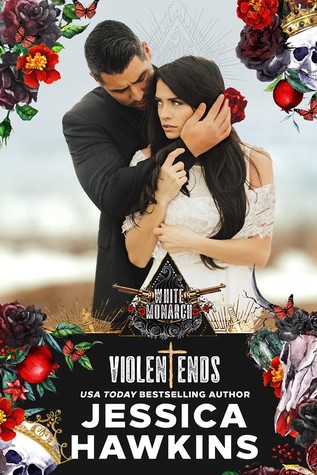 *** Violent Ends is the second book in the White Monarch trilogy and should be read after book one, Violent Delights. This review may contain spoilers if you have not yet started the trilogy ***

Natalia Cruz is now a wife, but not to the man of her choosing. Cristiano de la Rosa is well known monster in the already violent world of the cartel, and he will stop at nothing to show Natalia just who she belongs to now…

Violent Ends was the dirty talking, much anticipated second book in the White Monarch trilogy. Natalia and Cristiano are now married, and for better or worse, Cristiano insists that this marriage is going to be a real one, in every possible way…

Betrayed by the love of her life, Natalia is lost and confused in her role as the newest de la Rosa. After her first glimpse into life at the Badlands where the rumors of Cristiano’s darkest deeds take place, Natalia is now more torn than ever about what her future may hold…

Everyone has heard the rumors about the horrific things that Cristiano has done, and now he is demanding that his brand new wife stands not only by his side, but pledges her loyalty to him and the entire Calavera cartel.

After the jaw dropping cliffhanger we were left with in Violent Delights, this book was a little more tame, but no less scorching in the beginning of married life for Natalia and Cristiano. While the encounters between the two may be some slow burn torture, Cristiano’s brand of dirty talk delivers time after time!

I absolutely loved the character progression we see for Cristiano in this book, but I also felt like Natalia’s inability to see him for who he really is was staring to get a little ridiculous… I mean seriously, open your eyes girl!! But at the same time, I admire Natalia’s unbendable strength and her refusal to give in so easily to her convictions.

We are once more left with a cliffhanger that is heavy in the suspense and unanswered questions, and I am left a little desperate for the conclusion to this amazing trilogy, Violent Triumphs, which is set to release on November 12th. Yikes!! I don’t think I can wait that long!!