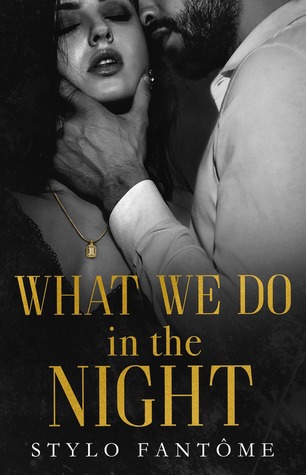 Valentine O’Dell may be down on her luck, but she still knows how to have a good time. As an employee of the exclusive fantasy club, Caché, she always makes sure her dates have a good time… but she never crosses the line from fantasy to reality… until she meets Ari.

Ari Sharapov is a busy, high profile lawyer who takes one look at Valentine and decides he has to have her…. exclusively. While his nights will be all things Saint Valentine, Ari refuses to let her encroach on his days as well… their rules are in place for several very good reasons…

What We Do in the Night was the sweltering and incredibly sexy beginning to the much anticipated Day to Night series!! Valentine and Ari’s relationship is anything but typical, based on a no strings arrangement that suits them both, it isn’t long before their lust fueled nights start to encroach on some deeply buried feelings that were not supposed to happen with their well planned arrangement.

With low funds and a sick grandmother to deal with, Valentine is a caretaker, student, and by night, an escort… of sorts. With her vow to never cross the line from fun date to being paid for sex, Valentine enjoys what she does… for the most part. And while it has so far been easy for her to hold true to her convictions, everything changes when she meets Ari.

Ari is a hard man to please. With his busy career and his penchant for steamrolling over anyone who gets in the way of what he wants, he is a cocky and controlling… and the personification of the hottest sex Valentine has ever had. He says he only wants her nights, but when he starts to show up in her regular life, the lines of their arrangement start to blur…

This was such a great read!! Valentine was an admirable hard-working woman who works hard to not let her job, or her less than perfect life, get the best of her. But once she meets Ari, things get a whole lot more complicated than she ever thought possible.

Ari was a character you love to hate… and definitely wouldn’t kick out of your own bed! His ability to say the wrong thing or disregard what Valentine may be feeling is only something that an unapologetic, yet otherwise irresistible man like him could get away with!

What We Do in the Night isn’t the last of Valentine and Ari’s story, and I am beyond ready for more from these two fascinating and strong willed characters!!