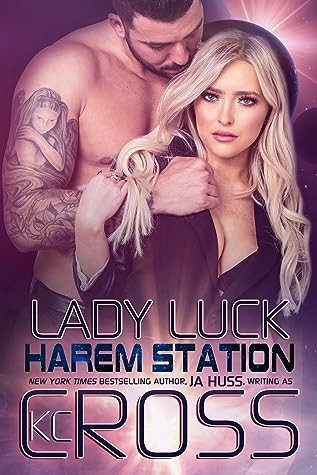 *** Lady Luck is book four in the Harem Station series and it should be read according to order. This review may contain spoilers if you are not yet caught up in the series. ***

Luck and his predestined soul mate Princess Nyleena don’t agree on much, except for maybe their daily scheduled sex meetings. And while he has been ordered to work at reigning in Nyleena’s crazy antics, it’s all Luck can do to just keep her from injuring him. Until he plants a little seed of doubt for his restless mate, and Nyleena starts a project all princesses can’t resist… problem solving.

Cygnian Princess Nyleena is feeling pretty stifled in her new home. With only a few connections on board, and one of them being a soul mate she loves to hate, she is left feeling at a loss of what to do with herself. But with the offer of a ship of her own, and with it, endless possibilities for her future, Nyleena sets out on a fact finding mission that might just reveal too many secrets for a station the size of Harem to handle…

Lady Luck was the ultra sexy and utterly intriguing next installment of the Harem Station series. Nyleena and Luck have nothing in common except their need for each others bodies, but when Nyleena sets out on a mission to find a way out of the Harem Station, Luck starts to realize just how much he really needs Nyleena in his life…

Nyleena is a feisty Silver princess, who is as rare as she is dangerous. With her need for Luck bringing them closer together, she refuses to give all of herself to a man who doesn’t give her the respect she deserves. With a knack for problem solving and a whole lot of restless energy, she puts everything she has into figuring out the myriad of secrets being kept on the station.

Luck is a man who has searched the farthest and most dangerous of places in his quest for materials for the station. He definitely doesn’t get along with Nyleena, she talks too much and loves to hurt him during sex, but when his need for her gets more and more frequent, Luck starts to discover things about Nyleena that no one has ever known.

Wow!! Things are getting more complex and dangerous for the residents of the Harem Station. With a few answers and many more questions than ever before, this elaborate story just keeps getting better and better!! Nyleena and Luck’s hate sex fueled love story adds a whole new level to the intricate issues plaguing the Akeelian men and their Cygnian mates. This fascinating story will continue in the next book, Prison Princess, which is scheduled to release on August 19th.