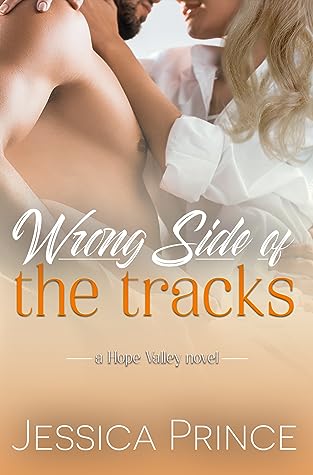 Despite her hard life, Gypsy Bradbury wouldn’t trade anything for the love she has of her brothers and sisters. While she isn’t ashamed of what she has to do to make ends meet, she also has issues realizing the kind of worth she possesses. And she absolutely refuses to give another man any sort of power over her life, ever again.

Marco Castillo moved to Hope Valley for a fresh start, and was immediately entranced with all things Gypsy Bradbury. But while his desire to get closer to her ends up with her avoiding him at all costs, it isn’t until she may be in danger that she allows him to finally help her. But Gypsy has seen a lot of heartbreak in her complicated life, and Marco has his work cut out for him if he wants to break through her impenetrable walls…

Wrong Side of the Tracks was a sweet and sexy story about a woman who would do anything for the people she loves, but needs help seeing just how special of a person she is all on her own. Marco looks at Gypsy and he can only see a devoted and beautiful woman who he craves a connection with, but she isn’t going to let him in her life quite so easily. But, if Marco succeeds, he may just realize that sometimes the things that you fight the hardest for are the most rewarding in the end…

Gypsy has sacrificed her entire life to jump in and raise her siblings as if they were her own. After she had to drop out of high school, she makes money by working at the grocery store by day… and stripping by night. She takes one look at Marco and decides he is way too good for a poor girl from a trailer like her… and vows to steer clear of his way too tempting assurances.

Marco is the sweetest and swooniest of men, and he not only works hard at getting Gypsy to let him in, but he devotes so much time and effort to making her life easier. With a mysterious past that he avoids talking about, his dedication to Gypsy and her family leaves him with a new type of family dynamic that he desperately want to be a part of.

With another fabulous couple finding their HEA in the Hope Valley series, Gypsy and Marco’s devotion to the people they love made for a beautiful and sweet read. With all the hard work being done at breaking down walls and a danger still lurking in Hope Valley, this book had some light suspense and of course, all kinds of sexy and entertaining moments as well.