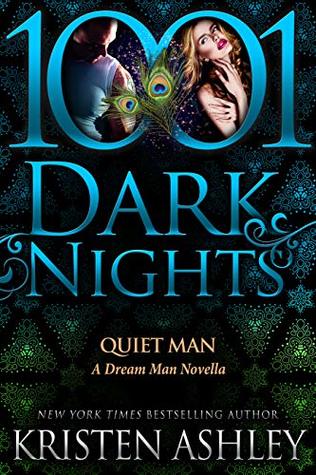 Charlotte “Lottie” McAlister is a woman who takes pride in her job as the headlining dancer at Smithie’s strip club. But her notoriety takes a turn for the dangerous when a crazy fan starts sending letters threatening Lottie’s life.

Smithie cares for his girls like they’re family, so with one call, he has the commandoes on it…

When Mo Morrison shows up on Lottie’s doorstep, the attraction is immediate… and mutual. But to do his job well and to protect Lottie, Mo needs to work hard to keep her at arms length to ensure his head is clear, at all costs…

Quiet Man is a dream come true for all of us KA fans who have come to love the well established Rock Chick and Dream Man book formula. This story revisited old favorites and introduced some fresh new characters who I feel we will be seeing much more of soon! As for Lottie and Mo, they are two people who have given up on love, but with one look, they see a future together… if they can get that far…

Lottie is Jet’s sister (Rock Chick Rescue) and we have heard quite a bit about her in passing through the Rock Chick series. She is comfortable with her body and her career exposing it, but has learned to be wary of people who don’t agree with her choices. When she meets Mo she is going through a difficult time, but the more she gets to know him, the more she can picture him in her life… permanently.

Mo is a stoic man who communicates in many ways that aren’t always verbal. He has dedicated himself to protecting Lottie, and is completely focused on his job… no matter how much he wants to focus on Lottie instead. He and the entire commando team are working hard to catch the man who is threatening Lottie, before time (or their sexual tension) runs out.

I really liked this story, but I would have enjoyed quite a bit more detail regarding Lottie’s stalker situation and the drama surrounding it. With a large dose of insta love and then a whole lot of hitting some relationship markers, I could have handled some depth of the story not relating to getting comfortable in a relationship. But, the sex is HOT, the story was interesting, and I added a whole star in there just for the magnificent Rock Chick and Dream Man crossovers… and the NEW SERIES coming as well!! (Pre-Order Dream Maker today!!)

Pre-Order Book One in the Dream Series!