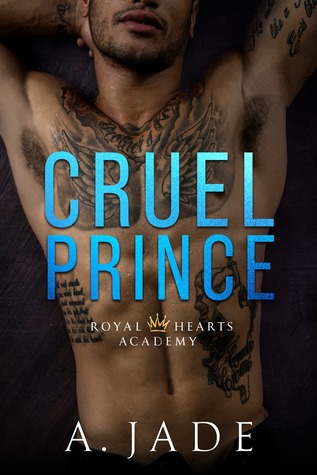 Dylan Taylor never imagined how awful it would turn out to be to return to her former life in Royal Manor. But after one step into Royal Hearts Academy, Dylan immediately realizes everything has changed since she was forced to move away… especially her former best friend, Jace.

Jace Covington wants nothing to do with Dylan and her backstabbing ways. He doesn’t know why she is back in town, but he will make it his mission to make her life hell, just like she so heartlessly did to him and his family…

Cruel Prince was an epic bully romance that was as riveting as it was scorching hot. Dylan and Jace used to be best friends, but when the unthinkable happens, this once inseparable duo will face off as the most legendary of high school enemies.

Dylan has been through a lot in her young life, but she once counted on Jace to be there for her as her closest friend and confidant. Until their relationship irrevocably changed, and Dylan was forced to suddenly move away. She returns to Royal Manor more damaged and confused than she was when she left, but she refuses to be a victim to the bullies of Royal Hearts Academy.

The Covington family roams the halls of their high school with absolute power and influence. And Jace is the worst of them all. With a score to settle with his former best friend, the more ruthless he is in his punishment, they more the sexual tension between them begins to simmer.

This book was ah-may-zing. Dylan was a fabulous heroine, from her spine of steel to her right hook, she had no problem sticking up for herself… repeatedly. Jace was a character you love to hate, and hate and hate. But the chemistry and history between him and Dylan heated the pages over and over again. I also LOVED the plot, it held incredible depth and heartbreak, and made the journey to HEA intriguing and so very worth it.