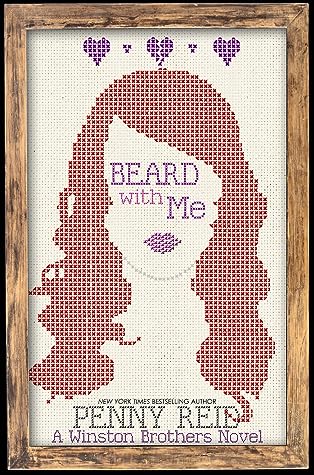 Growing up under the thumb of Green Valley’s notorious motorcycle club, the Iron Wraiths, Scarlet St. Claire is an expert at making herself invisible. But lately, Scarlet has found herself with more attention that she has ever wanted…

Billy Winston cares about his family, and little else. So, when he discovers Scarlet St. Claire’s mere presence too close to his home, he is ready to do whatever it takes to keep her far away from his family and the possibility of causing them any sort of problems… or so he thinks…

Beard with Me is a story that truly showcases the never-ending talent of it’s author, Penny Reid. Billed as a tragic love story, it is all that and so much more. For those of us who have been fans of the Winston Brothers series since the very beginning, Billy and Scarlet have been breaking our hearts for far too long, and this story was no exception. It’s sad, heartbreakingly so, but it is also the most beautiful and innocent introduction to Billy and Scarlet’s young love that was never meant to be…

With only hints of Scarlet’s tragic upbringing in the series thus far, this book cemented what we already knew of her character. Scarlet is a survivor, and as a teenager, she was already growing into an incredibly strong and equally shrewd woman. Her story is hard, but despite the horrors of her existence within the Wraiths, Scarlet is a breath of fresh air who sings like an angel, and never lets her circumstances keep her down for too long.

Billy works hard to help his family and keep everything running smoothly around the house. With his disdain for the Iron Wraiths clear for all to see, he also wants nothing to do with Scarlet St. Claire and the trouble she represents. But Billy soon finds out what kind of secrets Scarlet is harboring, and once her strength shines through Billy soon realizes Scarlet is nothing like the Wraiths who have mistreated her since birth. And he vows that she will never have to face them alone, ever again.

This book was everything I could have wished for in the backstory of Billy and Scarlet. I absolutely LOVED meeting the Winston’s as teenagers and young children, and seeing so much more of Mrs. Winston was an unexpected (and bittersweet) treat. I feel the need to read every single book in this series back again after all I learned all about the incomparable Winston family in their youth.

Billy and Scarlet may not have their happily ever after yet… but it’s coming… and no one deserves it more than these two. Their story concludes with Beard Necessities, releasing on November 4th, and not a moment too soon.