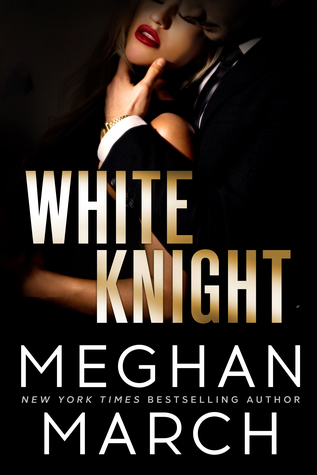 *** White Knight is the second book in the Dirty Mafia Duet and should be read according to order, after Black Sheep. This review may contain spoilers if you have not yet started the duet.***

With their feelings declared and no more secrets between them, Cannon Freeman and Drew Carson (aka Memphis Lockwood) now have a greater threat to deal with… the wrath of the Casso family. If Dominic Casso or anyone else associated with his mafia ties ever find out Memphis’ true identity, there may be little Cannon can do to ultimately save the woman he loves…

White Knight was the suspenseful and sexy conclusion to the all-consuming Dirty Mafia Duet. Cannon and Memphis’ story has only just begun, but with dangerous secrets and her ongoing investigation into Cannon’s not-so-innocent family, will they be able to overcome the obstacles that threaten their quest for a long and happy life together…

After we were left with a signature Meghan March cliffhanger in Black Sheep, Memphis and Cannon start this book with a heart pounding scene that sets the precedent for the action that we find throughout the entirety of the story. Memphis and Cannon’s relationship is as hot as ever, and their devotion gets stronger with every issue they face together, but when it comes to life in the mafia, nothing is ever guaranteed, and no one is ever safe.

This was a great read! It’s the conclusion of the duet, so you know I have to super vague to avoid spoilers. So I’ll just say that this book was action packed and revealed all the juicy secrets you could have ever hoped for. Memphis continues to be the intelligent and courageous woman we met and loved in Black Sheep. And Cannon is about to blow you away… so go out and enjoy it already!!

Start the Duet at the Beginning!