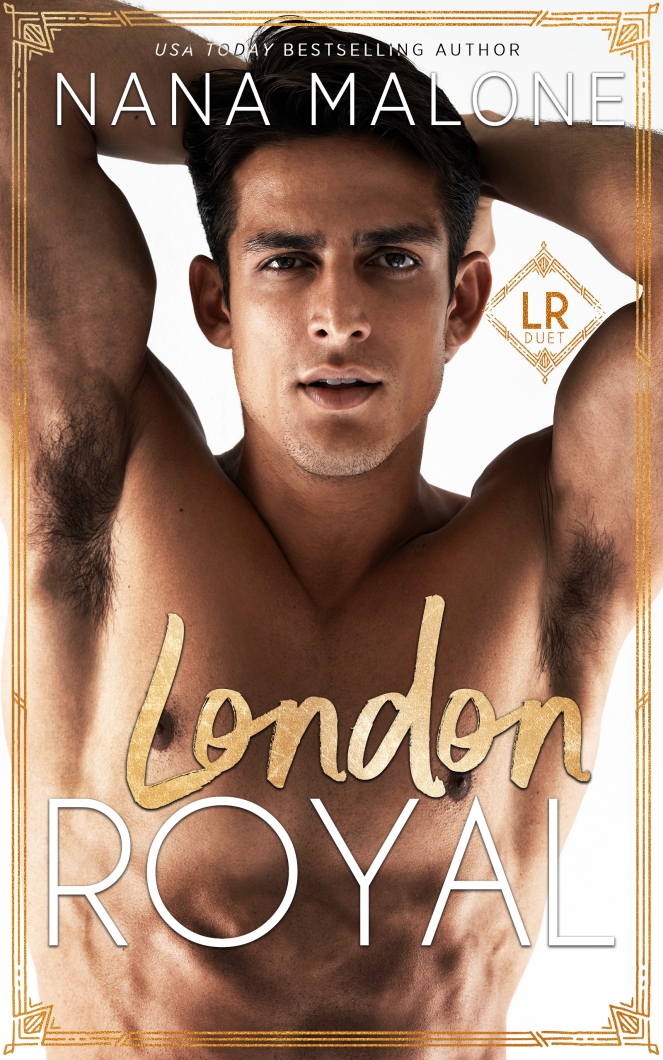 London Royal, book one in an all-new contemporary romance duet by Nana Malone.

Possessive pain in my ass.

I know exactly what I don’t want.

I escaped to London under the cover of night, never thinking I’d run smack into a man who would turn me inside out.

I had a plan. Simple, really.

Step one: Follow my dream, away from from the demons of my past.

Step two: Land on my own two feet, preferably far, far, away from the man who hurt me and broke my heart.

Step three: Live a little and avoid all men with dark secrets.

He’s a royal amongst peasants, and the last kind of trouble I need–a filthy rich alpha who can see straight into my soul. Our secrets hold us both captive.

Something tells me I’ll be powerless to stop his magnetic pull, especially when he tells me I’m going to be his, damn the consequences. 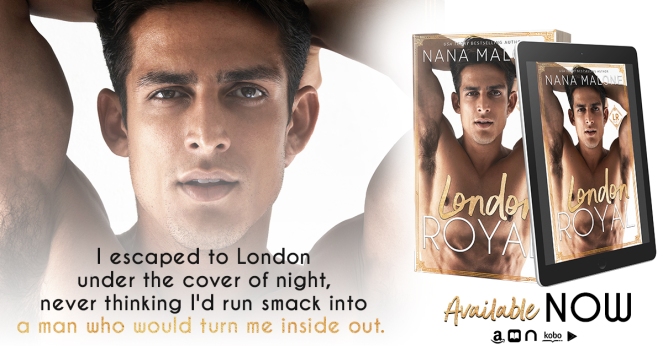 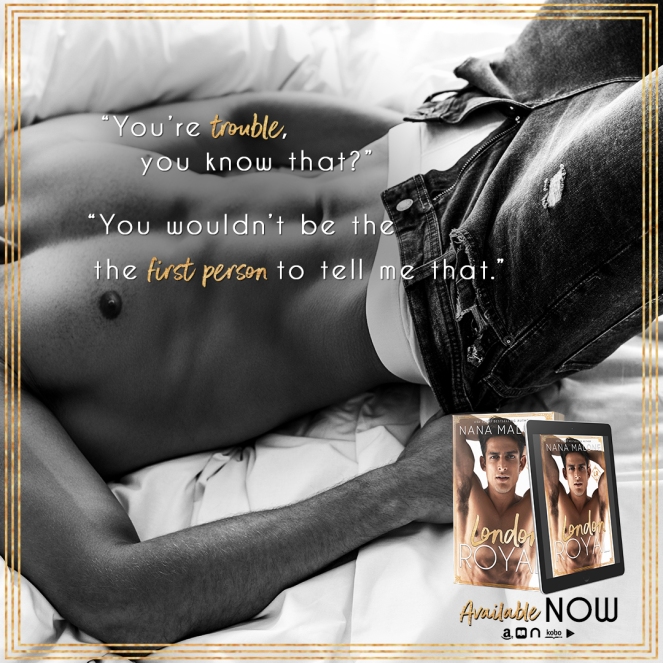 “I figured I’d try something different and ask you to dance.”

I whirled around and let out a small squeak of alarm. The muscles in my lower belly quivered, and my breath caught. My savior from earlier stood in front of me, looking like a cross between an angel of mercy and the devil incarnate. “We have to stop meeting like this,” I mumbled.

A smile tugged at the corners of his lips. “Well, there’s no rain at the moment, so we should be safe. I trust we were able to save your camera?”

Heat flooded my cheeks. “Yes. Thank you. Honestly that could have been ugly today. I’m indebted.”

“How about a dance, and we’ll call it even?”

“Now, I’m not as good as you are, so you’ll need to take it easy on me.” He outstretched his hand and waited for me to take it. He didn’t press or push, just stood there… waiting.

Jasper didn’t help me when he switched the track to a dancehall reggae song with a grooving beat.

Butterflies fluttered low in my belly. When was the last time I’d had butterflies? Unfortunately, with those butterflies also came fear. The fact was I didn’t know this guy. But, if he’d wanted to hurt you, he could have already. It’s just a dance.

I glanced down at his hand and placed my palm in his. Determined not to be nervous, I smiled up at him. “Hardly seems fair. You saved my life, and all you get is this dance.”

He drew me close, but not too close, keeping his hands at my waist. He waited patiently until I looped my arms around his neck. “It’s well worth it to me.” The low rumble in his chest as he spoke sent shivers coursing through my body.

As it turned out, he didn’t need any help dancing. He moved us easily in time to the seductive beat. I didn’t dare look around because I knew what I’d find—couples pressed so close that we might as well be naked and in bed. Dirty dancing was a requisite of dancehall music, but my partner kept a marginally safe distance between us, figuratively if not literally, because with every down swing of the base, our hips rocked into each other.

I swallowed hard, but then forced my gaze up to meet his. As soon as our eyes met, my heart rate kicked. His slate gray eyes, framed by dark lashes, stayed on mine. Nervously, I licked my lips. He stilled for just a second, causing me to lose my footing and bringing me flush against his body.

I froze, muscles tight. Touching wasn’t something I was used to or allowed easily. But with him, I didn’t want to be anywhere else. He smelled of mint and something crisp and woodsy, like he’d spent the afternoon outside on the water. I released my strangled breath and let my body relax into his. I felt, rather than heard, the low rumble in his throat as his chest vibrated against mine. His warmth enveloped me, and I could tune out everything but him. As if it were only the two of us on the edge of the dance floor.

There, in the dark, in the arms of a relative stranger, I felt safe.

His hands shifted on my waist as his thumbs traced my hip bones, and I forgot to breathe. Wobbly knees forced me to tighten my hold on him. As if responding to my body’s automatic softening, my eyes dipped to his lips.

What the hell am I doing? My brain tried desperately to take control of the situation, but I didn’t feel like listening. For the first time in longer than I cared to think about, I liked having someone’s hands on me. I wasn’t afraid. Instead, I craved it, that connection. My body hummed with vibrant sexual energy. An energy I hadn’t felt in six long years. There were nerves, but not from fear or trepidation. It felt good. Better than good. It made me remember how much I needed to be touched. Or rather touched by someone who could make me feel safe.

But just as the last of the tension ebbed out of my body, his thumbs pressed gently against my hip bones, moving me back several inches. He raised his head, and we stood like that for several seconds before I realized Jasper had switched the music. Oh, God. I’d been standing there with a total stranger, practically melting into him.

He smiled, and I was too blinded to finish. Gently, his thumbs traced across my hip bones once more, and he let me go. “Thank you for the dance.” Then he turned around and walked away.

I spent several seconds staring after him. What the hell had just happened?

“Hey, there you are.” Faith’s voice broke me out of the fog. “Who was that you were dancing with?”

I stared into the crowd feeling empty. “I have no idea.”

USA Today bestseller, Nana Malone’s love of all things romance and adventure started with a tattered romantic suspense she “borrowed” from her cousin.

It was a sultry summer afternoon in Ghana, and Nana was a precocious thirteen. She’s been in love with kick butt heroines ever since. With her overactive imagination, and channeling her inner Buffy, it was only a matter a time before she started creating her own characters.

While she waits for her chance at a job as a ninja assassin, in the meantime Nana works out her drama, passion and sass with fictional characters every bit as sassy and kick butt as she thinks she is.