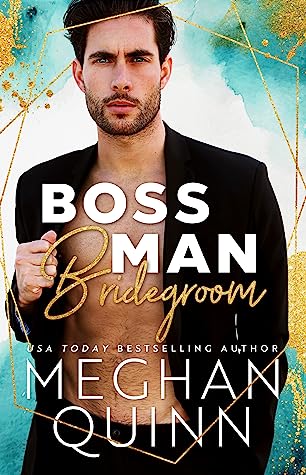 Rath Westin needs a new assistant, and in his world, personal recommendations from trusted friends can be golden opportunities. So despite an insult fueled first meeting and a distinct difference in personalities, Rath makes just about the least informed hire of his career… and invites a woman into his life who will change everything…

Charlee Cox has proven herself to be the best Executive Assistant any busy CEO could ask for, but what she isn’t is a “yes” woman. Charlee knows what Rath needs, even when he doesn’t know it himself, and she is going to give him just that… with a whole lot of color and FUN added to his life as well…

Boss Man Bridegroom was such an amazing read! I laughed out loud, I cried a little and the whole experience left me with a smile in the end. Charlee and Rath may clash on how his office is going to be run, but it isn’t long before Charlee worms her way into Rath’s heart, and takes over there, too. And just when their working relationship starts to take off… they agree on an even bigger commitment… getting married?!

I loved Charlee! So. freaking. much. She was not only unapologetically quirky and adorable, but her ray of sunshine personality brightened even the surliest of Rath’s moods. I laughed so hard with her nicknames and tell-it-like-it-is attitude, and I adored how she never let Rath bring her down… for long!

I was also completely infatuated with the contradictory Rath and his grouchy and focused work persona. And just when you think you have seen everything from his character, in comes a scene with his buddies and you fall for him ever harder than you thought possible. And don’t even get my started on their foray into historical romances… it’s just seriously the best character development… EVER!

Rath was guarded and did his best to keep Charlee at a distance, but even a successful and driven man like him has very little power when it comes to the force that is Charlee Cox. And seriously, one of my favorite parts is when he starts calling her by her self-appointed nickname… I would crack up, every. single. time.

I loved every minute of this book. It was hilarious (and not stupid funny that isn’t really hilarious, actually hilarious!), entertaining, fresh, and SUPER SEXY!! Yes, the sex is off the charts H.O.T. (once they finally get there that is!) Charlee and Rath were seriously adorable, and their love story, while super fun also had an emotional and endearing side as well. I was so sad to see this one end, it was everything you could ever hope for in a romantic comedy… and so much more!!

Read more from this world!