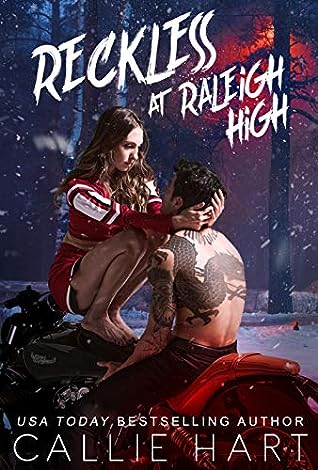 *** Reckless At Raleigh High is book three in the Raleigh Rebels series and should be read after the first two books. This review may contain spoilers if you are not yet caught up in the series. ***

Silver Parisi and Alex Moretti have been through so much more than any high schooler should ever have to endure. And although some of the biggest threats seem to no longer a problem, life at Raleigh isn’t going to get any better soon…

Reckless At Raleigh High was the suspenseful and sexy conclusion to the heart pounding and unpredictable Raleigh Rebels series. Silver and Alex have been through hell and back, and as long as they have each other they know they will come out on top… but Raleigh is far from done with these two young, world hardened lovers…

In the final culmination of Silver and Alex’s complicated love story, the ending of their high school careers is coming to a close, but before they exit the halls of Raleigh High forever, they have some loose ends to tie up in search of their final happily ever after.

This book showcased some excellent writing, an interesting plot and as always, some fantastic character tie-ins from some of the other beloved Callie Hart series. I also need to give a special highlight to one fantastic new character, Coach Foley, who added comic relief and the kind of no-nonsense push some of the rotten Raleigh kids were in desperate need of.

And while I enjoyed this story as a whole, it was verrrrryyyyyy long, which in the end I felt did the story more harm than good. There were too many added in plot points, which seemed to take away from the impactful beginning to the series. From their frustratingly bad decisions (I mean… PROM?!!), to the murky and somewhat convulated left-turn the storyline took, I was left a little disappointment in the end. And… the last bit of oddness I found was that the presence of two big parts of Silver’s life were just completely left out with a “out of town for the entire book” excuse.

In the end, I enjoyed Silver and Alex’s final book, with a theme of retribution and also some long needed acceptance, the only thing that took a backseat to the suspense of their hectic lives was the return of their incredibly sexy connection, and their relationship progression was top notch.