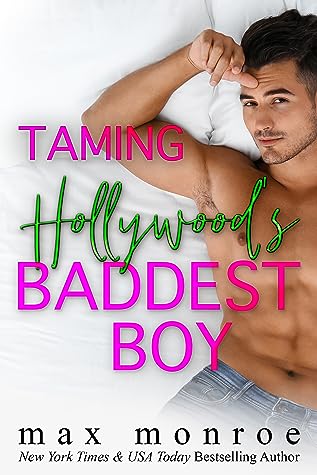 Billie Harris has big plans in Hollywood, but the aspiring producer has a lot to learn about movie making. So when she winds up working as a production assistant for the best production company in the business, it is a dream come true… until it isn’t. Somehow Billie promised the impossible… a leading man for an upcoming movie who disappeared from the limelight a long time ago. But, tenacious Billie is prepared to do anything to deliver on her promise… even trekking to the wilds of Alaska to do so…

Luca Weaver left the toxicity of Hollywood behind 8 years ago, and he has never looked back. Trading in his lucrative career for the solitude of Alaska was the best decision he ever made, so when Billie shows up with a script in hand, Luca makes his disdain for all things Hollywood… and her… very clear.

Taming Hollywood’s Baddest Boy was a laugh-out-loud hilarious and utterly adorable read! Billie and Luca’s antagonistic beginning introduced a delightful and heartfelt tone for the rest of their long and treacherous road to finding their HEA. From the wilds of Alaska, to the even more dangerous streets of Los Angeles, this story was an absolute delight to read!

Billie was super cute, funny AF and incredibly determined to find her success in the movie industry. With her fascinating talent of visualizing life as the scene of a movie, she absolutely belongs in Hollywood… if only she doesn’t kill her career before it even really starts.

Luca makes no secret of his desire to avoid Hollywood and all of it’s unhealthy trappings.   After leaving town and his career behind 8 years ago, he vowed to never return to LA and the demons he left behind there. So when Billie shows up at his door asking him to reconsider, the friction between them is red hot from the very beginning.

This was such a fabulous book! I loved every minute of Billie and Luca’s Alaskan adventure, filled with city girl mishaps, and the subsequent return to the harsh reality of life in Hollywood. And while their attraction may have started out as unwanted and complicated, neither of them could deny how right they felt in each others arms. Because even if their lives were a world apart, their magnetisim was utterly undeniable…