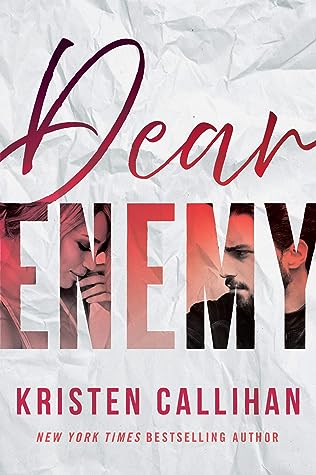 There isn’t much that would convince Delilah Baker to fraternize with her childhood enemy, but unfortunately, protecting her family is what tops the list. When her sister makes a big mistake, Delilah steps in… and volunteers to be THE Macon Saint’s new assistant and personal chef… and then she has to move in with him in the process…

Macon Saint is an up and coming actor who spent his childhood with the Baker girls. One was his girlfriend and the other his enemy, but the more Macon remembers Delilah, the more he realizes that he has never hated her… and that he feels quite the opposite when it comes to the grown up versions of the Baker sisters…

Dear Enemy was a highly entertaining story of two childhood enemies whose memories from the past are hiding the very strong feelings they may have been harboring their entire lives. Delilah and Macon get along like oil and water, but will soon find that their friction has been hiding an attraction that can not be denied… no matter how complicated it may be…

Delilah has grown a lot from the shy girl who Macon once knew, but she has never once backed down from a challenge when it has come to him, and she isn’t about to start now. As a success chef who knows her worth, she agrees to help the injured and angry Macon despite their past… all in the name of helping her sister right a wrong… and protecting her family in the process.

Macon grew up suffering through a terrible childhood, and the Baker family was often his only respite, but he never let on to that fact to his nemesis, Delilah. In fact, every time he lashed out at her, it was due to his own unhappiness, and he has regretted it greatly ever since. And now that they have reconnected, Macon is determined to show Delilah just how much she has always meant to him… and why he could never show it…

Delilah was an inspiration in her love for cooking and her loyalty, whether it was deserved or not. She was quick with the snark and never hesitated to stand up to Macon. And while her view on her relationship with her sister leaning towards being a little naive, there wasn’t much about Delilah that you couldn’t love.

Macon was such a complex and delightfully broody character! Seeing behind his wall and the reasons why he was always so unkind to Delilah will make you feel all kinds of sympathy for the misunderstood and surprisingly sweet man he is today.

This was a great read! The story itself was an extreme slow burn, and it sort of lost some of its steam half way through, but in the end, turned out to be VERY sexy. Delilah and Macon were such a great couple… when they finally got over their past animosity towards each other… but the friction between them was fantastic all the same!