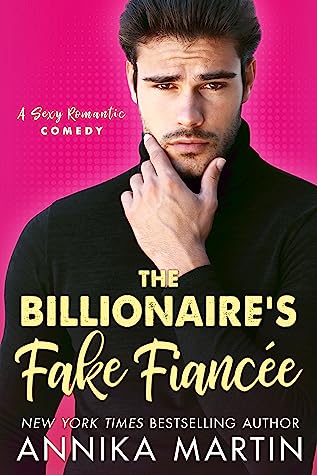 Rex O’Rourke is a self made billionaire who has a bit of an image problem… and a big account he needs to keep. So when it comes down to it, Rex needs a fake fiancée, and he only has one stipulation… make it someone who possesses all the qualities that drive him absolutely crazy, so she has zero chance of being a distraction…

Tabitha Evans is a hairdresser who loves what she does…. but has an injury that has her out of commission for the next six weeks… which is terrible for her business in the short term, but also has the potential of ruining everything she has ever worked for.

The Billionaire’s Fake Fiancée was a cute and all around entertaining read about an uptight businessman and a woman who knows how to make everything fun. Tabitha and Rex are complete opposites, but have a very hard time denying their unmistakable chemistry. And when their subterfuge starts to become all too real, Tabitha and Rex have to decide… is their relationship something that could become REAL?

Tabitha has a bubbly personality that (almost) everyone naturally loves. She was a fabulous hairdresser with the soul of a businesswoman, overflowing with ideas. Spending two weeks on a yacht with the gorgeous and grouchy Rex seems like a dream come true… until she finds out just what Rex really thinks of her..

Rex is a man who doesn’t want anything to do with romantic entanglements, or anything that would distract him from running his business. But once he starts spending more and more time with Tabitha, he soon realizes that she seems to effortlessly shatter every rule he has in place. She is fun, sexy and completely crazy… but Tabitha is slowly working her way into the depths of Rex’s heart… whether she wants to be there or not…

This was such a cute and funny read! I loved Tabitha’s joy finding personality and the crush she has been harboring on “Captain Sternpants” was absolutely adorable. Tabitha and Rex’s opposite personalities worked so well together, and they fell into a sexy and complicated dynamic immediately… and it just kept getting more and more entertaining from there!

I really enjoyed so many aspects of this book, and all of the characters were really great. But there was something about Tabitha and her never-ending caricature of how a real person would act that threw me off a little. She was delightful… most of them time, but any moment when she would show a little depth, she went way too far into a silliness that I just didn’t love for her.