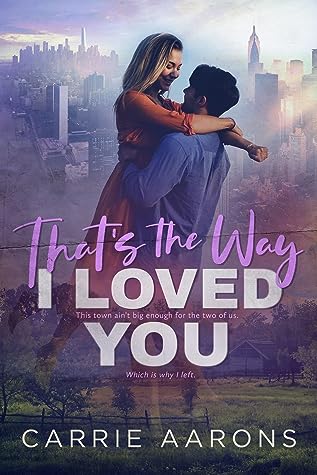 Ten years ago, Savannah Reese fled her hometown of Hale, TX for a fresh start and the anonymity of New York City. But when a surprise debt comes up on her credit report in the midst of buying a flashy new apartment with her boyfriend, Savannah realizes that her past in Hale still needs to be confronted, face on.

Jason Whitney deeply regrets the way that things ended with Savannah. After she left, he worked hard to become the man she needed, and when she never returned, he never fully regained that piece of his heart that belonged only to her.

And now… for the first time in ten years, Savannah is back in town… and there are a lot of people who have been waiting a long time for this day to finally come…

That’s the Way I Loved You was a heartwarming romance overflowing with sexual tension and second chances. Savannah and Jason were once an inseparable duo, but when things started going south in their young and idealistic lives, the bond they once shared was shattered beyond repair. Ten years later, nothing much has changed, except maybe those optimistic feelings of forever love, and the very core of who Savannah and Jason are, now that they have spent so many years apart…

When Savannah first left her hometown, she was heartbroken and alone. After years of work to survive on her own in Manhattan, she has found a way to thrive that she never possessed living in small town Texas. She is very proud of what she has accomplished, and she will never again mold her life to a man, or risk giving up her own dreams and triumphs.

Jason has never really moved on from what he and Savannah once shared, but living without her for the past decade may have also changed his feelings, considerably. What once was all consuming love is now never-ending arguments, which end in a sexual tension that should never be acted upon… or… should it?

This book was such a great read! Savannah made a difficult decision when she was young and her life was in complete shambles, but when she left town, she wasn’t just leave Jason behind, but her entire family as well. This story was not just a second chance at romance, but at rebuilding her relationship with her family… and healing old wounds in the process.

Jason and Savanna’s past mistakes and her very current boyfriend make for a roller coaster of a slow burn romance in the battle of big city vs small town living, and even if things work out in the end… just where will they live?