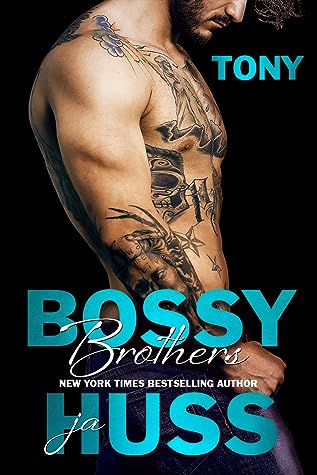 Tony Dumas is angry. Because when the ex-girlfriend that he had sent away eight years ago turned up out of the blue, he hasn’t been able to get a good nights sleep, or her out of his head, since. So Tony decides it’s time to show up on Belinda’s turf, and get her out of his system, once and for all.

Belinda Baker has moved on from her days of living in another state as a completely different person. Back then she was Rosalie, but the person Belinda is now is the woman she was always meant to be, and Tony showing up on her territory is just about the worst thing she could imagine happening…

Bossy Brothers: Tony is a very atypical love story, where the main characters are going to find their HEA… just not with each other. Belinda and Tony are like oil and water, and in their past, they did more fighting than actually liking each other. But, what Belinda and Tony still have is unfinished business… and resolving it may be their only way to finally move on…

Belinda (aka Rosalie Thompson) was sent to Fort Collins, CO eight years ago, under the guise of witness protection. She loves her life now, and her coworkers are more like a family than anything she’s had in a long time. Except for Vann Vaughn. He is a good friend, who has made no secret that he wants to be much, much more, no matter how much Belinda reminds him that a romantic relationship between them would never work out.

Tony once thought that he put his infatuation with Rosalie, ah Belinda… behind him. But by showing up in Colorado in order to stalk… ah, see her again, Tony is second guessing every recent decision he has made. Until he meets Soshee Amici… and his interest in Belinda is all of a sudden something he can’t quite put his finger on. Belinda lingers under his skin, and Soshee is fresh and exciting… but underneath it all Tony keeps going back to his unfinished… and highly irritating… business…

This read was everything unexpected that I love about JA Huss. This book was written with dual points of view in which each characters HEA is heavily wrapped up in the decisions they have suffered from their pasts. The plot was interesting and kept me absorbed in the story, but I also felt that it was definitely missing something more complex within the flow of the story. Also, with the focus being mostly on Belinda and Tony’s past, I didn’t feel like I got enough depth out of their individual developing relationships.

This was a good read, and of course another interesting addition to the Bossy Brothers series. But, by far my favorite part is the setting of Fort Collins. You see, Old Town is a very familiar favorite and every mention gave me a nice heartfelt glimpse into the city I love, when it is at is usual thriving, best self. I cherished every moment I was able to picture of it’s usually bustling and energetic scene through the characters of this story, while 2020 has kept me from enjoying it in real life.