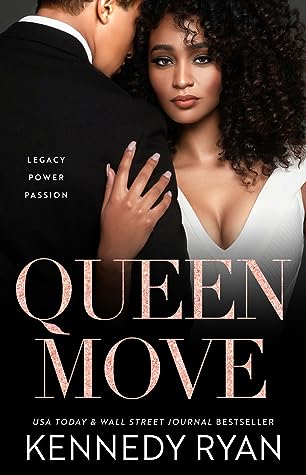 Kimba Allen and Ezra Stern were once everything to each other. These best of childhood friends who shared their first kiss and made promises of more… before it was all ripped away from them in one, fateful swoop.

Reconnecting after all of their years apart, they have grown in vastly different ways, but the attachment they once shared is not only still there… but stronger than ever. But, even though they are impossibly attracted to each other, being together now is a whole lot messier than when they were young… and free…

Queen Move was a fascinating story of lost love between two childhood sweethearts who are all grown up and successful in their own right, and have also very much moved on from their childhood love. Since the day they lost touch with each other, Kimba and Ezra have felt the ache of not being completely whole, but they didn’t realize it until they were once again standing in front of one another, and looking into the future they never had the chance to explore…

Kimba is a brilliant political mind who gets people elected and always fights for what she believes in. I loved how strong and assured she was as a woman, and when her life throws her a curveball, she always approached it head on.

Ezra was a sweet man who suffered as an adolescent for being different than almost everyone. But, Kimba was the one girl who never cared about superficial things like that. Channeling his past experiences and his love for the state of Georgia, Ezra returns to his childhood hometown, and once again finds the love of his life… no matter how messy a reunion between them may be.

This was my first book from Kennedy Ryan and it was truly a fantastic read! The plot and storyline were engaging and incredibly well done. The characters were fresh and interesting, and the writing was absolutely impeccable.

This slow burn, second chance romance was an enchanting and authentic story about the intricacies of real life and the sometimes messy journey of love.