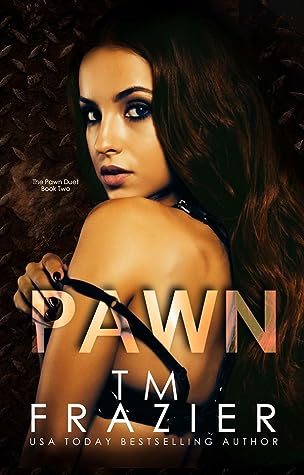 *** Pawn is the final book in the Pawn Duet and should be read following book one, Pike. This review may contain spoilers if you have not yet started the duet. ***

After a volatile beginning, Pike and Mickey’s relationship burned like a wildfire, incredibly hot and uncontrolled. But when Mickey is forced to make the choice between Pike and a long-awaited revenge, the burgeoning love between them may be doomed before it ever really began…

Pawn is the long awaited conclusion to the gripping story of revenge and redemption in the Pawn Duet. Mickey and Pike’s scorching hot attraction burned hot and fast, but when Mickey’s old life comes back to haunt her, what little trust they have built will be put to the ultimate test…

In the second book and conclusion of the Pawn Duet, Mickey has left Pike to return to the hate group which impacted her life so greatly. Secrets are revealed and surprises abound, but the connection Mickey and Pike share is in danger of unraveling in the face of betrayal and dishonesty.

I absolutely loved the beginning of this duet, Pike was an unforgettable introduction to this story and it’s gritty underbelly. And while the ending was satisfying and had some beautiful moments, I was left a little disappointed in where the story ultimately took some of it’s twists and turns. A huge surprise from Pike ends up being a bummer and a bit of a head scratching moment in Pawn, and the romance between Mickey and Pike seems to just be thrown in at odd moments here and there.

The writing was impeccable and all-around fantastic (as always!!) and the sex was incredibly hot. I also enjoyed the fate of what happens in the hate group when Mickey returns to make things right. But as a whole, I felt that this book missed it’s potential of delivering the unforgettable ending I thought it deserved.