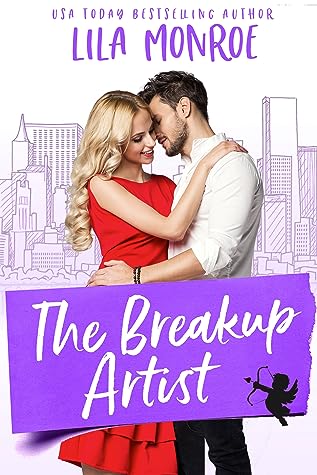 Katie Peters is so good at breakups, she wrote the book on them! But becoming the expert on breaking up didn’t come so easily… she had to learn the hard way by navigating through her own heartbreak. And it isn’t until Katie runs into THE ex, Wes Baxter, that she realizes just how far she has (or hasn’t) come from the girl who had hopelessly fallen for him…

The Break-Up Artist was a cute and entertaining read about second chances and sexy reconciliations. Katie was ghosted by Wes in a relationship she thought was going to all the right places. Soon after she finally pulls herself out of the anguish of a failed relationship, she reinvented herself as someone new… The Breakup Artist. And when the biggest opportunity she has ever had in her career falls in her lap… it also comes with a side of a very unforgettable ex…

Katie bases her brand on the relationship that ended and tore her apart, but since then she has a new outlook on breaking up, and she has built her entire career on navigating through all the hard parts of how a relationship can end. With more clients than ever and her very own book coming out, Katie is on the precipice of her career really taking off. And then she lands a celebrity client whose high profile breakup might just skyrocket her into Breakup Artist stardom! Unfortunately, her new clients association with the ex who broke her heart is about to throw them together… a lot.

This was a fun read! I loved the plot and the book was engaging and fun, with some lighter drama and some sexy starting over encounters. Katie was a great character, I enjoyed the confidence that she has gained since she and Wes first dated, and her ability to always keep him at arms length was admirable. I liked the idea of Wes, but I think that he came off as kind of a dud. I would have loved some more in depth views of his character to get to know him better. With his original “ghosting” and not a great excuse for it, I do think that he definitely showed Katie how sorry he was for their past, and he worked very hard to be a better boyfriend for it.

Read more from the Cupids Series!