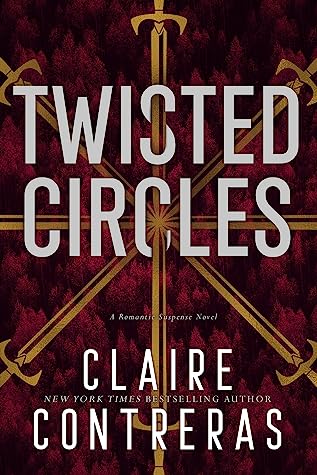 Waking up at the institution after a forgotten night, Eva Guerra receives the shock of her life when she is approached to fill in as the twin sister she never knew existed. Stella Thompson is rich, privileged, and may be in a vast amount of danger… and the only way to save her life is to join a secret society known as The Swords.

Adam Astor is The Swords president and acting caretaker of his society’s newest recruit, and lone woman, Stella Thompson. But with a growing attraction and quest for the truth fueling his and Stella’s interactions, it is only a matter of time until he realizes that the woman he is growing to love isn’t Stella at all…

Twisted Circles was a mind bending ride from it’s very first page. Secret societies with endless money and the world at their feet will uncover the scandal of a lifetime, which will threaten their own uncertain future within the country’s elite. Eva and Adam share an immediate attraction, but Eva is not who she says she is, and her mission to infiltrate The Swords may very well be the last thing she does. And when she is left wondering… is Adam someone she can trust, or the worst thing to ever happen to her…

Upon finding out of the existence of her twin sister, Eva vows to do anything to help her. But delving into the mysterious world of the secret societies of Ellis and the truth of her past, Eva may have signed up for way more than she bargained for. And when she meets Adam, the rich and seemingly untouchable president of The Swords, Eva knows she has very little chance of holding the attraction of a man like him… until Adam proves to her just how wrong she is.

Although he grew up rich and privileged, Adam is far from a spoiled and entitled kid. With his last name, his role as president was a given when it came to the society, but the more Adam sees from the shadows of the Manor, the more he starts to question just what he is really involved in… and how he can save Eva from the danger she seems determined to take upon herself…

This was a great read! Suspenseful and intriguing, I was enraptured by the plot and the background of The Swords and the other societies. Eva and Adam’s attraction was fairly immediate and a little glossed over at times, but I was really rooting for them to find a way through the mess they became embroiled in. I felt like I was left with a few unexplained loose ends when it came to this story as a whole, but in the end I really enjoyed this read.

Start the series at the beginning!