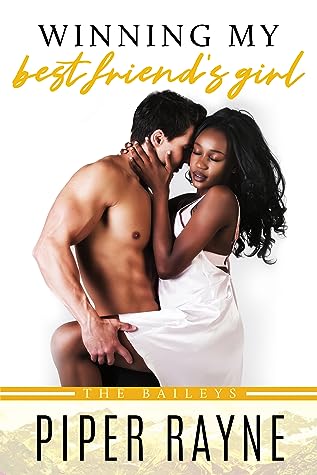 From the moment she first walked into his class, teenager Kingston Bailey was infatuated with new girl, Stella Harrison. But when high school drama and the dating of his best friend comes between them, Stella leaves Lake Starlight, and Kingston behind… for eight long years.

But, to Kingston’s shock, Stella’s back, and even though he is still unabashedly in love with her, this time he refuses to make the same mistakes that tore him apart all those years ago…

Winning My Best Friend’s Girl was an angsty, second chance romance filled with family, love and all kinds of past and present drama. Despite the connection that Kingston and Stella have always shared, a romance between them was never in the cards. But after eight years of distance and unspoken feelings left between them, now that Stella is back, those never acted upon emotions are about to make a insistent comeback…

Stella has never forgiven herself for coming between Kingston and his high school best friend. Thinking distance was the answer, now that she is back in town, the thought of facing him again seems more daunting than ever. And when they finally lay eyes on each  other after all their years apart, Stella realizes, more than ever, that she needs to protect her heart from all things Kingston Bailey.

Kingston has been battling unrequited love for far too many years. And when he discovers that Stella moved home and then did everything she could to avoid him, he decides it is past time to really move on from his Stella infatuation. Which is, of course, easier said than done.

I have been waiting for Kingston and Stella’s book, and their previously teased-upon angst did not disappoint! This second chance romance touched on so many deep and thought provoking subjects, while still providing the always delightful Bailey family antics which make this series so delightful. Loss, unrequited love, interracial relationships and accepting people for who they are, Kingston and Stella have a lot to work through before they find their much deserved HEA.

The Baileys series always delivers a delightful and entertaining read! I love the growth this family has accomplished throughout the series, and following everyones ups and downs through each and every new book is always an extra added delight to whichever new couple is currently in the spotlight. Next up: Rules for Dating Your Ex.

Read more from the Baileys!