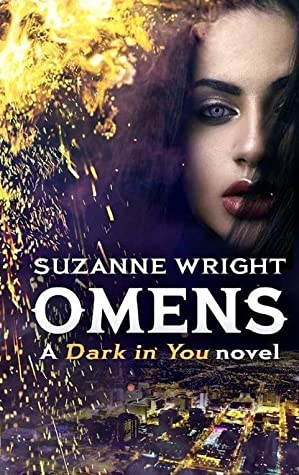 Khloe Wallis is an imp who gets great pleasure out of driving the gorgeous incubus, Keenan Ripley, absolutely crazy. With a simmering sexual attraction that they have both been avoiding for far too long, when a bet is placed, Khloe and Keenan are going to be getting to know each other a whole lot better…

Omens was extremely sexy, lighthearted, fun, and also filled with chilling suspense. Khloe and Keenan have been dancing around the draw they have for each other, but once they finally give in to their desire, their long ignored feelings will be impossible to conceal for much longer. But in the midst of their personal awakening, new dangers will threaten to tear them apart before they really even have a chance at something more…

This was an entertaining and fun read, while being dark and creepy at times as well. Khloe was unique and utterly crazy… in a good way. She prides herself on being able to always drive people a little bit crazy., and she enjoys using her talents on Keenan far too much. Keenan works hard at ignoring his desire for Khloe, but every day it seems to get more impossible than the last. And when they finally give in… fireworks will ignite.

This book was super sexy, and I really enjoyed the relationship between Khloe and Keenan. The suspense leaned toward the creeepppppyyyyy, and worked to keep your heart pumping with every fight scene. As part of The Dark in You series (which I admit I haven’t read most of) there were major tie-ins to characters from other books in the series.

Read more from the Dark in You series!