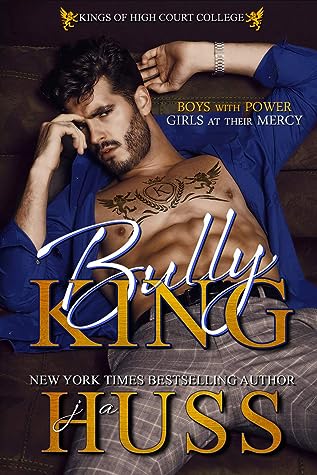 Cooper Valcourt is the reigning king of High Court College, and Cadee Hunter is absolutely nothing in the eyes of his peers. But, while Cadee may not “belong” with the elite class of students, she holds a secret that could tear their so-called-kings entire world apart…

Bully King was bully romance at it’s darkest and most twisted. Cooper has been torturing Cadee for years with his negative attention, but when the secrets of their past start to crumble under their present, Cadee refuses to give in. No matter how much she suffers along the way…

Cooper despises his role as the king of everything he finds disgusting about his family and the school they are all connected to. And while he suddenly has to play his father’s  game or be disowned, Cooper’s only joy is in finding that his old pawn, Cadee Hunter seems to be back and ready for some more of his his brand of mistreatment.

Cadee once escaped the clutches of Cooper and his friends Ax and Lars, but the entire school seems to know about what happened with the three of them in high school. And although spending time with the rich and privileged of High Court College is the last thing Cadee would ever want to do, when an opportunity for a scholarship comes up, she knows she would be a fool to throw everything she has ever known away.

This book was fascinating and delightfully warped! Centered around a summer for the upper echelon of High Court College, Cooper and his friends are tasked with the initiation of the Fang and Feather society. With their high powered fathers, The Chairman, the Judge and the Mayor running the show, Cooper and his friends have a job to do… make the lives of their charges hell… including the “staff” who is to tend to their every whim.

In true JA Huss style, this book is a twisted and tangled mystery unto itself. The past between Cadee, Cooper, Ax and Lars was brushed over and hinted about, but the burning connection between Cadee and Cooper pushes everyone for more than they are ready for… except for me of course. I am ready for it all, including more from this duet, and the next book, Ruling Class is coming, very, very soon.