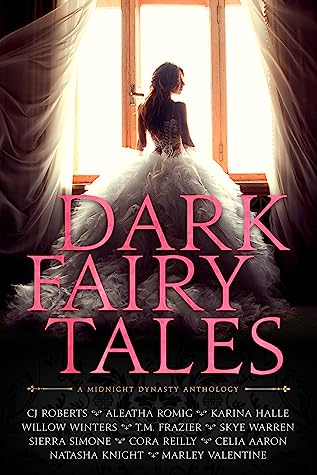 With a relationship for everyone in these eleven tantalizing tales, some stories ranged from downright amazing, while others may have just been satisfyingly enjoyable, but each and every one delivered the scorching heat this anthology promises… and more!

Anita Washington is a college student turned call girl for a man who abhors being touched.

Lily McDaniel is looking for a sugar daddy, but needs the funds to look the part. Making a deal with Clark Evergreen seemed like a good idea at the time… until he comes for his final payment…

The Princess & the Pea by Sierra Simone

Morgan Leffey, is Vice President of the United States, and a proud sexual dominant. Needing to blow off steam in a setting other than her usual club, Morgan agrees to a blind date… and ends up face-to-face with Lorne Lothian, her determined ex-husband…

Ginger Jones infiltrates the party to send a message to a mafia kingpin from her grandmother, when she attracts the attention of a big bad wolf who seems to know a lot more about her than she knows about him…

The Ugly Duckling by CJ Roberts

Amaya Perez has overcome a lot in her tragic life, but when someone from the shadows once saved her, it changed her life completely. And now, with her very vocal obsession with the so called “Vagina Vigilante”, the person Amaya has put on a pedestal may not be who she thinks she is…

Beauty & the Beast by Willow Winters

Annabelle has to find a way to repay the debt her father owes to the ruthless Calum Harrison. But the payment Calum is expecting may be too much for Annabelle to sacrifice…

Jack & the Beanstalk by Marley Valentine

Grayson Hughes aka “The Giant” has a killer going after all of the men he once had any sort of relationship with. Someone wants Grayson’s attention… and he is prepared to give it to them…

Jean Whitney is being forced into an arranged marriage to save her family from complete financial ruin, and her latest suitor is her worst yet. Peyton Chanler may have the money to get what he wants, but she refuses to let him have any of her “firsts”…

The Swan Princess by Natasha Knight

Lucia DeMarco has been promised to marry a monster, and has been locked away at a convent for the last four years, waiting for the day she will truly be his. Until she sneaks out to go to a party of an old friend and comes face to face with the man himself, Salvatore Benedetti…

With only a day off from her housekeeping job, Lorna Pierce’s brother asks her to attend a fancy party as his plus one. Meeting a handsome man she will never see again and sharing a few kisses before her ride leaves at midnight is like a dream, one she wishes wouldn’t end as abruptly as it does…

Neve Blanca’s stepmother wants her killed, and she hires “The Hunter” to do the deed so she could be rid of her once and for all. But, Chase Huntington III has other plans for the intoxicating beauty who shares his dark desires…