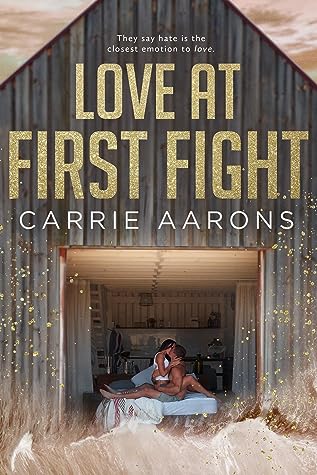 After being dumped in the worst possible way, Molly Archer is moving on from her ex-boyfriend… but she is STILL going to stay in the summer house they had booked as a group summer vacation with his friends. And even though she realizes that her ex’s best friend and her most vocal critic will be staying in the house as well, Molly refuses to let anything ruin her well-earned summer plans.

Smith Redfield has made his feelings for Molly very clear… except for the one little detail of how his disdain is actually hiding just how much he loves everything about her, the one woman he just can’t have. But with a newly single Molly sleeping just down the hall for the entire summer, Smith’s feelings are about to burst right out of his little heart filled eyes…

Love at First Fight was a fast and sexy story of friction, hidden love and all the angst you can handle. Molly and Smith don’t hold back on their banter and sour feelings towards each other, but when Smith comes clean with how he really feels about his best friend’s ex, all of that disdain is about to take a turn for the smoking hot desire…

Molly was a sweet and dedicated teacher who loves doing what she can to make a difference in the world, one student at a time. After being blind-sighted when her boyfriend essentially ghosted her, she looks to her summer in the Hampton’s to pamper herself a little, and get over her ex. And while attempting to avoid Smith, the man who loves to treat her so badly, Molly soon starts to realize that her ex’s friend has hidden depths and secrets, that she never could have fathomed.

Not only has Smith been pining away for his best friend’s girlfriend for the last year, but he also suffered the loss of his twin sister, and Smith has never felt more alone than he does now. And while he admits that his treatment of Molly is just plain terrible, he also believes that it is the only way for him to hide his true feelings for her, by making the world think he simply can’t stand her.

This book was sexy, entertaining and filled with all the angst! Molly and Smith’s fighting is hiding the attraction they share, but a year of distrust and hardships will work against any relationship they may desire, unless they can break through the walls they both keep themselves behind.